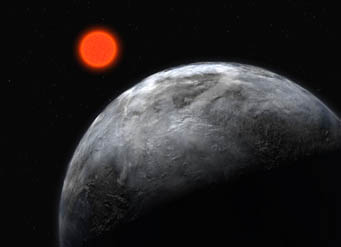 Would you call this Earthlike?

Here we go again. The news tonight will undoubtedly be abuzz with the discovery of another "Earthlike planet." Except chances are extremely slim that it actually is Earthlike, or even the nearly tabloidesque "habitable."

Finding an ever-smaller planet around a star is interesting, and is another step closer to actually finding a life-bearing planet elsewhere in the galaxy. But how many of these steps do we have to go through? I can imagine in a few more months, when the next "almost Earth" is found — this one will be 4½ times the mass of Earth, not just 4.8 times. Sooner or later, people will start wondering, "I thought we already discovered that."

Of course, no one knows what Gleise 581c is really like. Researcher Stéphane Udry says, "Models predict that the planet should be either rocky — like our Earth — or fully covered with oceans." Or it could be a molten mess. Or have no atmosphere at all. That wouldn't be very habitable. Gleise 581c orbits between two slightly bigger planets, the inner one on the faster track passes only 3 million miles away. I would expect some tidal shenanigans going on.

I'm sure astronomers will truly find Earth's twin in the near future. Hopefully there will still be some excitement left.