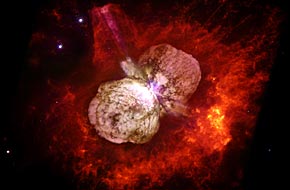 The Hubble Space Telescope captures the glory of the about-to-go-supernova Eta Carinae. When it blows, it may be as big as the largest stellar explosion seen so far.

Didja hear about the brightest supernova ever? It made all the major news outlets this morning after NASA held a press conference yesterday. Some people were wondering why it wasn't big news on our website. There were several reasons. We tend to rely on wire stories for some breaking news, and we had to wait for it to show up in the wire-story queue. Also, we already reported on it — more than two months ago.

Former S&T editor Bob Naeye wrote "Superduper Supernova" in January when the supernova results were submitted to the journal Nature. It was published as the April issue's lead News Note, available at the end of February. S&T readers knew about it well before the rest of the world.

By the timing of it, we were wondering at our editorial meeting if NASA read about it in S&T and then decided to have a press conference about it.