Alan MacRobert, who sits across the hall from me, is a self-proclaimed geek — and proud of it. Come to think of it, all the Sky & Telescope editors are geeks, each in our own way. And so are most members of my astronomy club.

What's a geek? The term is hard to pin down, but the Wikipedia entry for geek is a good place to start. A geek is a lot like a nerd, but with a different take. Both are obsessed with technology and socially inept, or at least unconventional. But the emphasis in "nerd" is on the ineptitude, while with "geek" it's on the technical aptitude. 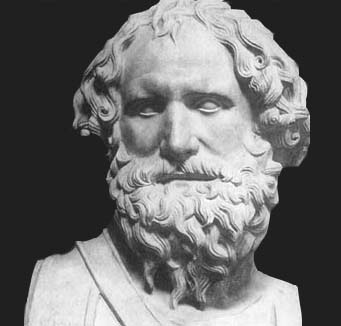 Archimedes (287–212 BC) was a mathematician, physicist, engineer, inventor, and astronomer.

As it happens, my daughter's latest school assignment was to write a biography of Archimedes (287-212 BC), who has a strong claim to be the First Geek. Famously, he ran naked through the streets of Syracuse shouting "Eureka!" when, during a bath, he realized how to measure the volume of an irregular solid by the amount of water it displaces. And he's said to have died during the Roman invasion of Syracuse because he was too busy working out a math problem to pay attention to a soldier with his drawn sword. You can't get much more socially inept than that!

But Archimedes transcends geekdom; he's also the prototype of a loftier stereotype: the scientific genius. He was to classical times as Einstein is to our time. In fact, many of the Einstein stories echo Archimedes eerily. It would seem that Western culture has a very ancient and powerful myth of genius-inventor that both of these figures were forced into, with myths being created around them wherever they didn't fit the stereotype.

Both Archimedes and Einstein were important primarily because of work they did in abstract math and science. Einstein's greatest accomplishment was General Relativity; Archimedes' was a method of calculating the areas and volumes of curved figures, work that presaged the development of integral calculus by Leibnitz and Newton two millennia later.

But influential as these works were to contemporary and future mathematicians and scientists, they're hard for the layman to comprehend. So despite the fact that Archimedes and Einstein were both men of peace, both are famous instead for military inventions to which they're either only tangentially connected (Einstein and the atom bomb) or which are completely mythical.

It's said that when the Romans attacked Syracuse, Archimedes used arrays of mirrors to focus sunlight on their boats, setting them aflame. It's a great story, illustrating the practical power of scientific reasoning. Sadly, it's almost certainly untrue. The arrays of mirrors would have been incredibly unwieldy and would have required totally cooperative victims to sit still for a long time while the sunlight was brought to focus. More to the point, the geometry of Syracuse harbor and the angle of the Sun make it clear that the ships couldn't have been in a place where this trick would work.

But I find it extremely intriguing that this myth — which has a thoroughly modern ring to it — was concocted in classical times. The dream of power through advanced technology runs very deep in our civilization.

Speaking of biographies of Archimedes, astronomer Alan W. Hirshfeld wrote one that was published in late 2009: "Eureka Man: The Life and Legacy of Archimedes." I haven't read it, but I bought it for my Dad, and he enjoyed it.

Mr. Flanders, that statue has a strange resemblance to your picture in the upper corner of the article.
Coincidence? perhaps...