The Joy of Small Instruments

Looking over my observing notes for the past few months, it's apparent that a disproportionate fraction of my sessions have been done with binoculars and small telescopes. There are several reasons.

First, the weather has been in an odd pattern, unpredictable and prone to rapid changes. That means grabbing anything I can lay my hands on as quickly as possible when a hole opens unexpectedly in the clouds. My life has also been busier than usual, pushing me toward short sessions where the setup time for a big scope isn't justified. And my last major project was the review of three small and inexpensive telescopes. I collaborated on that with Josh Roth, who's even more of a small-scope fanatic than I am. 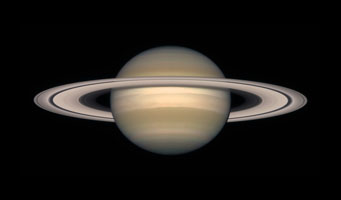 Saturn's rings are roughly as wide open now as they were when the Hubble Space Telescope captured this shot in October 1997. No earth-based telescope will give you a view this detailed. On the other hand, no photograph can compare with the experience of viewing Saturn directly.

In fact, the highlight of last year's observing for me came during that review. I had already observed Saturn with one of the test scopes some months earlier, in the evening, but I wanted one more peek. So early one workday I set up the scopes on the sidewalk, right in front of our office, with the sky already blue, and took a good look at Saturn.

I was totally blown away! The view through the Orion SpaceProbe 3 was particularly impressive — small, but as crisp as anybody could possibly want. Most of the credit, of course, goes to Saturn itself, whose rings are now opened wider than they've been since 2008. But's there something special about the view through a small scopes with good optics — and this little $100 wonder definitely qualifies.

I've also been spending a lot of time lately with an Orion FunScope 76mm reflector, an Orion GoScope 80mm refractor, and GalileoScope 50mm refractor. Just right for quick looks on cold winter nights! With inexpensive optics, long focal ratios like the SpaceProbe are a big plus, but I much prefer the mini-Dob mount on the FunScope and GoScope.