The Scientific Value of Visual Observing

John Henry said to his captain:
A man ain't nothing but a man.
But before I let that steam drill beat me down,
I'll die with my hammer in my hand. 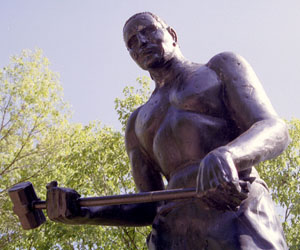 John Henry was a legendary railroad worker who bet that he could work faster than the newly introduced steam drill. He won the bet, but worked so hard that he burst a blood vessel and died. Moral: nobody can resist the inevitable — but you have to try anyway.

For more than 100 years, it's been obvious that astrophotography has far more scientific value than visual observing. Visual observing reigned supreme in a few niches until recently. For instance, normal cameras can't match the eye at capturing fine details on the planets during brief moments of steady seeing. But with the advent of video cameras and computerized image stacking, even that advantage was lost. It's probably fair to say that there's no astronomy that the human eye can do that can't be done as well or better by electronic imaging. Moreover, electronic devices can make images across the entire electromagnetic spectrum, almost all of which is invisible to the eye.

Most important of all, imaging leaves an objective, auditable trail. Visual observations, by contrast, are notoriously unreliable. The history of astronomy is littered with sightings that proved to be false — dating back to the invention of the telescope and before. Most people have heard of the canals that Percival Lowell fantasized seeing on Mars. But did you know that Galileo saw cities on the Moon? That particular error has been swept under the rug by people eager to present science as an inexorable, inevitable, one-way march to the truth.

Yet amateur astronomers continue to make valuable contributions to astronomy using nothing but their eyes and wits. How is this possible? And how much longer can it go on? 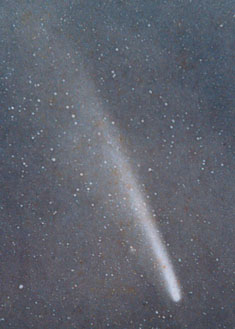 This photograph of the Great September Comet of 1882 proved that even modest photographic equipment could capture huge numbers of faint stars.

The discoveries that loom largest in the popular imagination are comets. That's no doubt partly due to the fact that the brightest ones are spectacular to look at, and many fainter ones make spectacular photos. But perhaps even more important is that fact that comets are named after their discoverers. We're a society that idolizes the individual — despite the fact that never before in history have individual contributions counted for so little.

But only a small fraction of comets are discovered by amateurs these days, and of those, more are found by imaging than visual observing. I bet that most of the amateur-discovered comets would be found by the pros not long after, and that the time lag wouldn't matter much.

Supernova discoveries don't get nearly as much press, but they probably have more scientific value. Again, these would eventually be found by the pros. But supernovas change a lot faster than comets (usually!), and the early stages of a supernova's outburst are very interesting and important. Even if the amateurs only speed discovery by a few hours, that can have considerable value.

Supernovas are extreme examples of variable stars, and amateurs have played a central role in variable-star observing for a long time. But these days, the lion's share of the good work is done with CCD cameras. A skilled amateur can measure a star's brightness with an error of 0.1% using a CCD camera, compared to 5% or 10% for the best visual estimates.

But Arne Henden, head of the American Association of Variable Star Observers, assures me that visual observers still play a key role in monitoring cataclysmic variables — stars that erupt unpredictably, including supernovas, novas, and other less glamorous categories. That's because people skilled at observing these stars are scattered all around Earth, eager to be mobilized with a moment's notice. That makes it possible to monitor the stars continuously; it's always nighttime somewhere on Earth.

To my mind, the area where visual observing is most important is meteor science. It just so happens that humans can monitor a huge field of view in very dim light and spot anything that moves. This ability, which presumably evolved for avoiding predators, happens to be ideally suited to detecting meteors as well.

And as with variable-star observers, there's a worldwide network of people who like nothing better than lying outside in the freezing cold, at a time when all self-respecting people are asleep, keeping careful track of minuscule blips of moving light. So most of what we know about meteors comes from visual observation.

I have to conclude that visual observers are most valuable when they're acting in concert, not as heroic individuals. And just as John Henry achieved glory by doing a purely mechanical job, visual observers are at their best when they're emulating machines: objective and dispassionate. Really, their main advantage is cost. If you had to pay meteor observers by the hour, it would cost a fortune; machines would do the same job cheaper. But amateurs do it for love, not money.

I like Tony Flanders comments about visual observing. It use to be I wanted to turn in visual observations of comets and asteroids. But modern cameras have made any observations I might make seem obsolete. So I keep them to myself now days.

I have been an amatuer off and on for some 50 years. It use to be a good telescope was all you needed. Amatuers were good at making home made ones. Now that is just the beginning. It must be outfited with a clock drive, a digital camera, and a computer for processing images.

Then there is the quest for dark skies which have become harder and harder to find because of light pollution.

I still love to be out under the night sky though. I always will.

Even meteor observing may soon become a more productive instrumental activity. Without doubt, modern electronics have given the observer superior capabilities toward producing useful scientific contributions. Such "cyborg" enhancements have even restored significant "observational potential" to light polluted areas.

The newfound strength of electronic observing is ultimately an illusion. I'm happy for anybody who can taste and smell that bucket-o-extra crispy when looking at a picture, but most people won't get inspiration and motivation from a picture any more than they'll get satisfying nutrition from watching a KFC commercial.

When desirable instrumental enhancements become observational necessities, those technological improvements are nothing more than "life support".

I think what has been clearly happening is affordability of technology at the lowest level. It is nothing more than the continual march of technological "improvement".

Unfortunately I do not doubt that this continual movement will continue with more integration of computer controls and cameras. There will no doubt come a point where it will be common place to find telescopes with GOTO, CCD cameras integrated into the eyepieces and can email you with all the images it caught that night while you slept.

But I would also say there will be those who will prefer the less technological approach.

I think what has been clearly happening is affordability of technology at the lowest level. It is nothing more than the continual march of technological "improvement".

Unfortunately I do not doubt that this continual movement will continue with more integration of computer controls and cameras. There will no doubt come a point where it will be common place to find telescopes with GOTO, CCD cameras integrated into the eyepieces and can email you with all the images it caught that night while you slept.

But I would also say there will be those who will prefer the less technological approach.