The University of Arizona Astronomy Camp

Ever since the late 1980s, the University of Arizona’s Alumni Association has sponsored an annual astronomy camp. Its purpose is to expose young people to the universe and the ways that astronomers study and uncover new secrets about it. The youngsters get to use serious research telescopes. Up to this year, the main locales for the astronomy camp had been the summits of Mount Lemmon and Mount Bigelow, high in the Catalina Mountains north of Tucson. This year the camp moved to Kitt Peak National Observatory, where the mighty 90-inch Bart J. Bok Telescope was waiting for them. 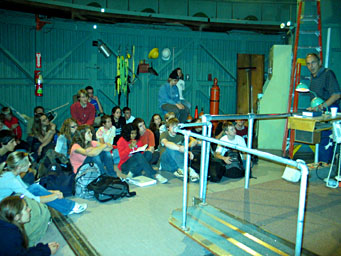 On June 23, 2009, David Levy addressed a group of enthusiastic young astronomers at the Bart Bok Telescope at Kitt Peak National Observatory during part of this yearâ€™s astronomy camp held at the University of Arizona.

I had a little bit to do with the dedication of the 90-inch for Bart, since I knew this great astronomer for the last few years of his life and wrote a biography of him. The 90-inch was Bart’s idea; its genesis was a talk he had with Lee Hayworth, then the director of the National Science Foundation. As the story goes, Bart was proposing a 60-inch telescope, but Hayworth responded: “Bart, you know how to build observatories. You know how to run observatories. Let’s turn your 6 upside down to a 9 and give Steward Observatory a 90-inch.” The optical design was a close copy of Kitt Peak’s 84-inch Ritchey-Chrétien reflector, whose optical system provided wider fields of view than classical Cassegrain systems.

The 90-inch is used heavily for research during the time of the month when the Moon doesn’t brighten the sky, but it was still possible to set the telescope aside for several nights for use by young people, most of whom have very little experience with astronomy. Although part of the national observatory, the 90-inch has its observing time scheduled by a Steward Observatory committee. It’s to their credit that the scope was made available for educational purposes.

A central purpose of the astronomy camp, according to Director Don McCarthy, is to assemble a group of young people who have few perceived notions about astronomy and are thus amenable to fresh teaching. I’ve been involved with the camp from the beginning when I would join Ray White, the popular University of Arizona astronomy professor, at the summit of Mount Lemmon and talk with the small group of young astronomers at the 40-inch telescope. Within a few years Don McCarthy had taken over the operation of the camp, and he has run it ever since. For many years, the camp used the 61-inch Kuiper telescope on Mount Bigelow, named for the famous astronomer who founded the Lunar and Planetary Laboratory.

Over the years, two telescopic observations stand out as memorable camp experiences. One was a view of Messier 51, the Whirlpool Galaxy, with the 61-inch reflector. The galaxy was magnificent; its many arms stretching far out from its nucleus. It felt as though the telescope had transported me into space and that I was viewing the Whirlpool from a close distance. The other view happened last week. We were looking at Saturn with the 90-inch. The planet appeared exquisite with bands (softer than Jupiter’s but still distinct and beautiful) visible on the globe, and the rings circled the planet in a very narrow ellipse that looked almost like a flat line. My wife, Wendee, noted that the ring system cast a shadow on the tops of the planet’s gas clouds.

Each year the camp offers a different theme, and this time it was the International Year of Astronomy 2009. It was especially appropriate, since the camp is a wonderful way to inspire young people about the wonders of the night sky.

Hi David, Appreciate your article and the other recent ones at this website. It's good to know that many steps are being taken to expose young people to the wonders of the Universe . . . and to see how astronomy is such a wonderful hobby for all ages . . .and for a lifetime.
Thank you.
Wendee, that's a great photo.
Patricia