Think of the Children! 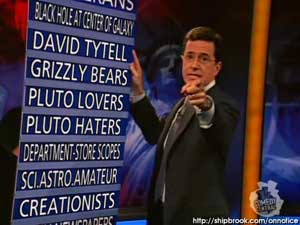 The Pluto controversy seemingly has no one happy.

The issue of setting the definition of the planet gets more interesting as the IAU meeting continues. There should be some more details today.

What has amused and annoyed me is how the general media has been covering the story. I yelled at the TV several times as national and local news reported that "astronomers had decided there would be 12 planets" as if it was a done deal. While newspapers generally got the story right, their headlines often confused the issue. Then there was the call to come up with a new mnemonic for remembering the planets (you know, "My Very Eager Mother Just, etc." ). First, there aren't any new planets yet. Second, "Xena" isn't 2003 UB313's approved name!

Perhaps astronomers will decide on a definition for a planet this week, and perhaps not. I await to see how the mass media reports on how astronomers "changed their decision" to have 12+ planets.

But to anyone who is whining about having to remember all the new objects that may subsequently be called planets, as well as books having to be rewritten and such: Get over it. I wonder if there was such bellyaching back in the 1800s when the United States was adding a new state to the union every few years. Maps had to be redrawn! Children had to learn new things! Oh, it must have been truly horrible. Seems to me that occasionally adding new planets to the solar system is. . . American! Stephen Colbert should be proud!

And should Pluto be demoted, "disappointing children" shouldn't be part of the equation. If mere "tradition" is a major factor for keeping the status quo, then you've already lost my interest.