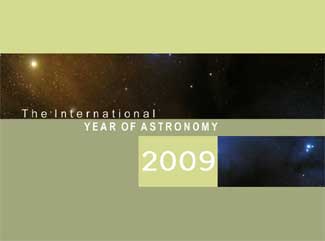 In another year or so, you'll be able to mark your calendars for a celebration of astronomy.

After receiving a press release last Thursday, I had planned to note the new website for the International Year of Astronomy 2009 before the weekend. When I clicked on the link on Friday, however, it didn't work. Well, it's working now, so head on over to astronomy2009.org to find out how the world will be participating in a "global celebration of astronomy and its contributions to society and culture" in two years. A resolution passed by the United Nations in November officially set the ball rolling.

There isn't much on the website yet, since activities are still being formulated. Of note, however, is an announcement that the first major planning meeting will occur in March, at the headquarters of the European Southern Observatory in Germany. Registration for the meeting opened last week.

And here's something totally unrelated. Are you like me and nitpick movies, TV shows, and commercials when they get the astronomy wrong? (It's how Phil Plait's Bad Astronomer got his start.) On an episode of Angel, for example, when they try to show the Sun rising in Los Angeles, but it's obviously the Northern Hemisphere Sun setting played in reverse. I went to see Night at the Museum over the weekend and was pleased that despite the fantasy (and other plot holes), the movie got the Moon right in the morning twilight — twice.