Traveling Without a Scope

Well, here I am, back from India. As I said, I didn't bring a telescope with me. On the whole, I don't regret that decision. My lightest "serious" telescope rig adds up to roughly 10 pounds — a pretty major encumbrance. And the equipment's cost is as much of a problem as its weight and bulk. 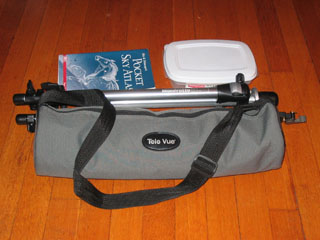 A 70-mm f/6.7 telescope works well on a sturdy photo tripod, and its eyepieces and accessories fit nicely in a small food-storage container. But the setup still weighs and bulks enough to be a significant burden when carrying your luggage on foot or traveling by public transportation.

Consider, for instance, traveling on a typical Indian bus. Most luggage goes on top, where it's liable to be stolen or crushed — not a very attractive option for a telescope. But carrying it on your lap in a crowded bus isn't especially attractive either.

Instead, I brought a truly minimal set of astronomical equipment: my 10×30 image-stabilized binoculars, a red flashlight, and Orion's Deep Map 600. In fact, Deep Map 600 was the only real "extra." I would have brought binoculars anyway, to look at birds, distant mountains, and so on. And flashlights are essential in India, where the electric power is notoriously unreliable.

The binoculars came very much in handy when Comet Holmes underwent its unexpected and startling outburst. And I was also very glad to have them during our 3-day "camel safari" in Rajasthan. A camel safari is a slightly hokey touristic experience, but it does give some sense what it was like to travel in one of the great camel caravans that used to cross this region for centuries or millenia. Everyone agrees that the highlight is sleeping on the dunes under a genuinely dark sky. 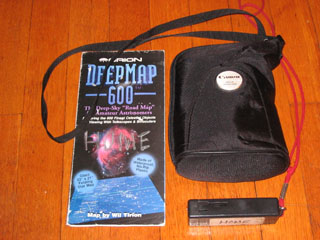 Hand-holdable binoculars are an invaluable adjunct for any trip. And a lightweight star chart and red flashlight convert them into a full-fledged astronomy kit.

We were at latitude 26° north — about the same as Miami, Florida or Brownsville, Texas. That allowed me to see a big chunk of sky between declination 30° and 50° south that's not accessible from my home in Massachusetts. The binoculars were of limited use in the evening, when the galaxy fields of Sculptor and Fornax were transiting the meridian. But they were great in the early morning for viewing the splendid open clusters of Puppis and Vela. I was particularly struck by the contrasting pair NGC 2477 and NGC 2451, the former a patch of creamy light through binoculars, and the latter coarse and well resolved. Very much like M46 and M47.

But I found myself missing a telescope not for my sake but for my companions. We had a guy from Australia and one from England in our group, and the Englishman had never so much as seen the Milky Way before, much less looked through a telescope. I would have loved to show him a few things.

I missed a telescope even more a couple of weeks earlier in the trip, when we were in the Himalayas. We ended up spending a night unexpectedly in a small village, and we hung around outside in the evening as the glow disappeared from the high peaks and the stars started to come out. Not surprisingly, every child in the village was out there with us. But none of them spoke any English, and our Hindi is extremely rudimentary, so we didn't have much to say to each other. I really, really wished that I had my telescope with me so that I could have spoken to them in the universal language of astronomy!

From India . I have Orion Equitorial Mount Reflector.
Incase, you come to India again, please let me know so that I can share my equipment if you feel so.

HI, THIS IS K.R.NAIR FROM KERALA, INDIA. I WAS SURPRISED TO READ ABOUT YOUR TOUR EXPERIENCE IN INDIA. RAJASTHAN IS A REMOTE STATE IN NORTHERN INDIA. NEXT TIME YOU MUST VISIT KERALA. I AM A SKY ENTHUSIAST HAVING MY OWN ASTRONOMY CLUB IN MUMBAI WHICH WAS FOUNDED IN 1992 CAUSE I WAS WORKING IN MUMBAI FOR MORE THAN 40 YEARS. NOW I AM SETTLED DOWN IN KERALA IN THE EXTREME SOUTH OF INDIA. I HAVE ASTRO ACTIVITIES HERE TOO WITH SUFFICIENT EQUIPMENTS. HERE THE SUBJECT OF ASTRONOMY IS JUST PICKING UP WITH THE OPENING OF GROUP ACTIVITIES IN EDUCATIONAL INSTITUTIONS. NEXT TIME WHEN YOU VISIT KERALA WITH OR WITHOUT A SCOPE PLEASE DO GET IN TOUCH WITH ME. BEST WISHES, K.R.NAIR (INDIA)