Twilight is my favorite part of the whole 24-hour cycle. It's a magical time, the transition between the humdrum workaday world and the mysterious world of night. As the darkness unfolds, all the familiar, nearby objects become ghosts, and we see deeper and deeper into the universe.

Twilight is officially divided into three bands. I'll describe how they proceed in the evening, but the entire process takes place in reverse in the morning. First comes civil twilight, which starts immediately after sunset and ends when the Sun's center is 6° below the horizon. During this period, normal civilian activities like playing ball or reading a newspaper can be done without artificial illumination. If it's clear, the sky remains bright blue during civil twilight, and it's when the astronomically inclined play "star light, star bright, first star I see tonight." If they're above the horizon, Venus and Jupiter are usually visible as soon as the Sun is gone, and first-magnitude stars are quite prominent by the end of civil twilight. 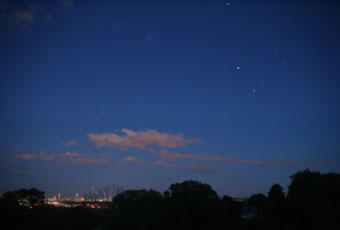 Jupiter and Antares shine above and far to the right of downtown Boston, MA, shortly after the onset of nautical twilight.

After that comes nautical twilight, which ends when the Sun is 12° below the horizon. During this period, the color fades from the sky and the stars begin to appear in profusion. This is the best time for celestial navigation, because all the important stars are readily visible, but it's still easy to see the boundary between the water and the sky. Astronomical twilight follows nautical twilight, but I'll save that subject for another day. As far as anybody except astronomers is concerned, twilight is done and gone when the Sun is 12° below the horizon.

I vividly remember the first clear, dark night I spent outside the North Temperate Zone. I was in Pachmarhi, a small resort town near the center of India. Googling just now for Pachmarhi's latitude, I find that this town is now the site of a telescope array that records Cerenkov radiation from cosmic gamma rays. Talk about unexpected connections!

It was the night of Divali, a major Hindu festival that always coincides with the new Moon — for reasons that I may discuss in a different blog entry. Two things took me by surprise. It was the first time in my life that I'd ever had a clear northern horizon but been unable to see the Big Dipper. And it got dark so fast! The balmy tropical evening had put me in the mood for a long, lazy summer twilight. But it was in fact November at latitude 22° N, 20° south of my home in Massachusetts, and the light seemed to vanish almost as soon as the Sun was gone. As the chart below shows, twilight is more than 50% longer at my home in midsummer than in the tropics in autumn. 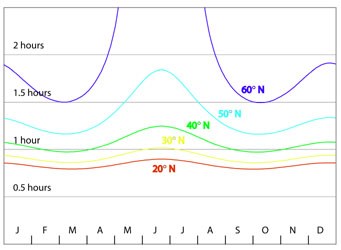 This chart shows the combined duration of civil and nautical twilight throughout the year at selected latitudes. This is just evening twilight; double the times if you want to include morning twilight too.

What's going on? In the tropics, the Sun rises high in the sky every day, and it falls like a rock, hitting the horizon almost at right angles. I don't normally think of Boston as having a particularly high latitude; after all, we're closer to the equator than the North Pole. But at midsummer, the Sun hits the horizon at a shallow angle and skims slightly below it for a long time, never getting more than 25° down at its lowest. (The corollary, of course, is that the Sun only rises to 25° at midwinter.) We're near a critical transition point; see how much sharper the peak is for the 50° curve than for 40°? Concord, NH is within commuting distance, just 60 miles (less than 1°) north of Boston. But that short trip delays the end of nautical twilight by 5 minutes!

Scotland, Scandinavia, and much of Russia lie north of 55°, where midsummer twilight stretches 6½ hours from sunset to sunrise, and it never gets truly dark. Sound bad for stargazing? Things are much worse when you take astronomical twilight into account! Click here to find out why.

In some sense, twilight is the most mysterious time of the day to me. It is still wonderfull to watch under a clear blue sky.
Even after being an amateur-astronomer for 30+ years.

Also here in the Netherlands we do not often realize that we are really quite up-north (52 degrees lattitude). We have grey nights from may to august. But when I go to mid-France (45 degrees lat.) there are always some dark hours every night.

Maybe you can blog on this phenomenon I found: in the rural mid-France area I often see objects (like M33) clearer in twilight, than during a dark night in my hometown (urban area, 140.000 inhabitants). It seems the air in the rural area is more transparant. Which leads me to this question: we often talk about the darkness of our skies, but is air transparancy not equally or even more important?

Last night my granddaughter & I were out @ 12:00 midnight & noticed the moon was dark red to red-amber. We've never seen that before. It was in the eastern sky, so it shouldn"t be the setting sun?? When it was full it was golden also. we are here south of Detroit, Mi.

Some times twilight can be a little spooky too. The night before last, my wife and I took the dog for a walk in a nearby "park" rather late in the evening. I put "" around park as it is just a series of paths going up a creek in some fairly wild woods. The light was getting dim when I saw something black scurrying up the trail some 50 feet ahead of the dog. I managed to grab her before she picked up on it, in fears that it was a skunk. It took off up the gully bank before I could get a good look at it in the low light. A few minutes later my wife pointed out that it was paralleling us up on the bank and it was big. I finally did get a view, and realized it was a porcupine! I hadn't seen one in years. Porkies don't go much faster than a human walk unless they're terrified, so it was just maintaining position on us. I'm comfortable in woods after dark, but my wife got kind of spooked by this and we turned around to head back. Sometimes things look a lot bigger in dim light!

In response to Rosiepasko, the Moon has been redder than usual recently in the eastern U.S. because of all the smoke in the upper atmosphere from the forest fires that are raging across the western states.

In response to Robert Stekelenburg, I'm still wrestling with the whole concept of transparency. I'm not completely sure what causes poor transparency, or even how it's defined. I suspect that it has several different aspects.

But in the case you cite, there's another possible explanation besides transparency. It's very hard to judge how dark a sky is by eye alone. My guess is that a "dark sky" in your hometown is actually much brighter than twilight in rural France. There's a limit to how dark any town of 140,000 people can be, no matter how good the lighting practices are. And you may know that it's twilight in rural France, because the sky is still getting visibly darker. But if you can see M33 naked-eye, it must be pretty deep twilight.

I think I know why Mr Flanders couldn't see the Big dipper, even though the hemisphere was clear. In the festival of Divali, people celebrate by bursting firecrackers. A lot of dust and soot is thrown into the atmosphere, and that must have been what stopped you from seeing the Big dipper.
The only puzzling thing is that Pachmarhi isn't too big a town. How much of an effect would that have had? However, at 22 degrees North, the Dipper would have been really low in the sky, to say the least.
Here, in Delhi, we can barely make out the constellation of Orion on the night of Divali, its that bad.

Tony responds:
The sky was nice and dark in Pachmarhi; the reason I couldn't see the Big Dipper was that it was entirely below the horizon. At my own latitude, all seven stars are circumpolar, so that was a totally unexpected experience. 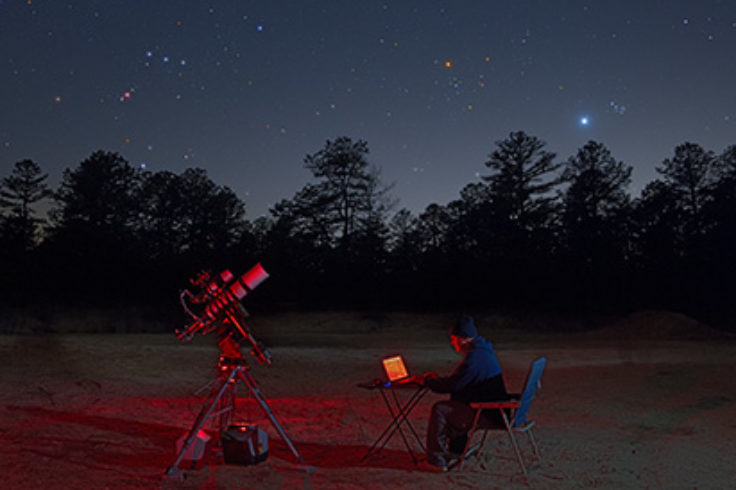