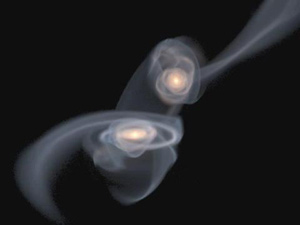 John Dubinski's computer simulations show the Milky Way and Andromeda galaxies passing by each other at a range of 60,000 light-years without colliding.

The October 2006 issue of S&T should be in the hands of many subscribers by now (newsstand browsers should see it around Labor Day). The cover story about the upcoming collision of our and the Andromeda galaxies makes for interesting reading. Basically, some 3 billion years from now, the two largest galaxies in the Local Group will get very close together. They may not actually pass through each other, but "merely" swing around each other. Either way, the gravitational disruption will send stars everywhere. Why worry about the Sun becoming a red giant in 5 billion years, when we — and however many dwarf planets there will be — might not even be in the Milky Way at that time?

The article's author, John Dubinski, has studied the galaxy collision with the help of computer modeling, and he has created many fascinating animations of interacting star systems. You can sample them by visiting Dubinski's Web site. The animations are also available on a DVD (with music by John Kameel Farah), which is how I first watched them.

Although some of the animations are purely fantasy (such as, five identical spiral galaxies form a regular pentagon and then fall into each other), there are several specifically for our Andromeda encounter. After the collision, the Sun just happens to repeatedly fly back and forth through the core of the Milky Way like a pendulum. That's probably not what the Sun will do, but it's one of the possibilities. Dubinski also created a 3-D animation that uses the standard red-and-blue glasses. It didn't work too well for me, however. But that could be partly due to the fact that I need to get new eyeglasses.