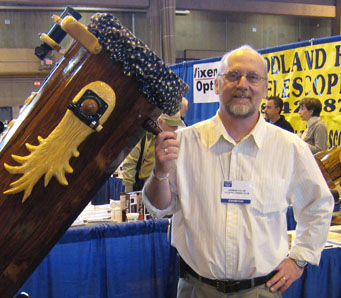 One of the most eye-catching exhibits at the 2007 Northeast Astronomy Forum was a collection of Dobsonian telescopes handcrafted from fine woods. I was particularly intrigued because I know the owner, Normand Fullum, having camped next to him several years running at Stellafane, where he's won numerous prizes. Normand told me that he's realized the dream of a lifetime by quitting his day job and becoming a full-time professional telescope maker. When I asked how much market there was for fine handcrafted wooden telescopes, he told me that he'd sold one while setting up his display booth. He also makes and refigures mirrors from 4.5 to 18 inches in diameter.

His telescopes aren't quite my cup of tea; I prefer something more utilitarian and austere. But they're certainly works of art — and highly functional too. You don't win first prizes in telescope-making competitions without flawless mechanical and optical quality!