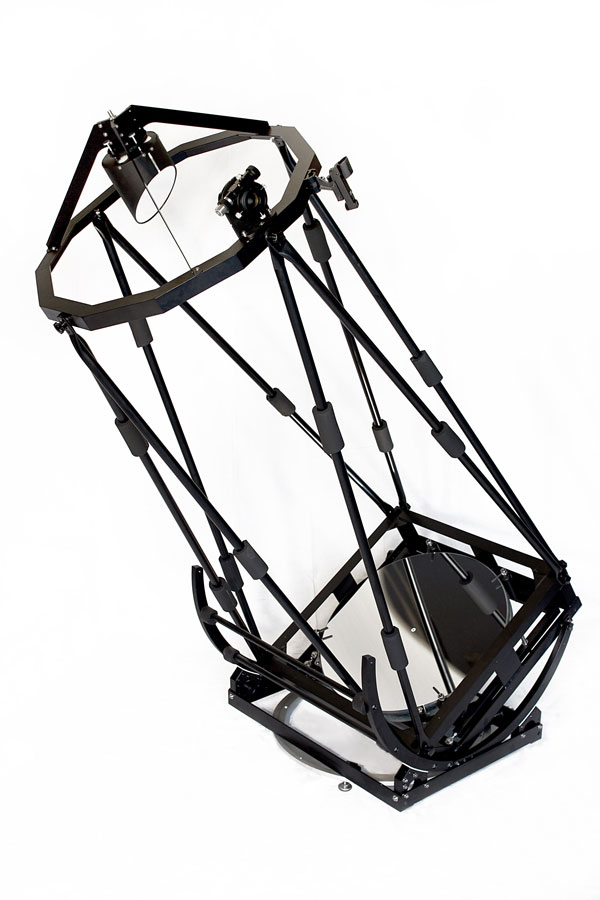 Hubble Optics, known for manufacturing high-quality Newtonian reflector optics, now offers the UL24, a 24-inch f/3.3 ultra-light Dobsonian ($9,500). This fast Newtonian reflector is built for travel, featuring a lightweight “sandwich” mirror that drastically reduces its weight and cool-down period compared to solid mirrors. The UL24 weighs only 154 lb (70 kg) when fully assembled, and breaks down into its constituent parts to fit into most compact vehicles. The scope’s primary and secondary mirrors feature 96% enhanced-reflectivity coatings, and its eyepiece stands just 77 inches from the ground when pointed at the zenith. The telescope uses eight precision-machined trusses and an optimized primary flotation system supporting the primary mirror. The telescope includes a dual-speed, 2-inch Crayford-style focuser with linear bearings engineered to support the heaviest eyepieces available today. See the manufacturer’s website for additional details.

SkyandTelescope.com's New Product Showcase is a reader service featuring innovative equipment and software of interest to amateur astronomers. The descriptions are based largely on information supplied by the manufacturers or distributors. Sky & Telescope assumes no responsibility for the accuracy of vendors statements. For further information contact the manufacturer or distributor. Announcements should be sent to [email protected]. Not all announcements will be listed.

I run a telescope business in Germany and I once registered (back in 2014) to be the distributor for Hubble's Telescope's but they seemed unwilling to fix some mechanical problems with their 'scopes, and I didn't want to retrofit every one I sold to my specifications, so I terminated our agreement. Now, according to what I can see of the photo above and from pics on their web site, it still looks like the 'scopes have many of the same problems as they did back in 2014 and here I quote (myself):

Next, problems with my UL16.

OK, like I said, I just spent 8 days testing the telescope or rather attempting
to observe with it and I can tell you this - The optics are good. Excellent, as
a matter of fact, and that is not only my opinion, but that of several other
observers who were there in La Palma with me with their telescopes. But you
already know that the optics are excellent, so this is not an issue. Your
Dobson telescopes, though, have two serious and several medium and minor
severity mechanical problems.

The two "major" severity problems are:

1. The "bump" that occurs when adjusting/moving the telescope in altitude. This
is really, really bothersome since the bump occurs very often because I almost
always viewed objects at that height (not intentionally, but by accident). Now
I don't care what the Astronomy Technology Today reviewer said about this,
because I've used a lot of dobsons and I expect smooth movement when viewing an
object, not a bump that prevents me from viewing an object at a favorable
viewing height. I tried to fix the problem by replacing the rosette knobs with
normal bolts and tightening them with a wrench instead of my hand. This was
because I would move the bearings so that the bump would be minimal, if not
completely gone, tighten the knobs, then use the telescope and when it would
rotate down to view an object closer to the horizon, the weight of the
telescope would then press down on the bearing and move the bearings slightly
and then the bump would be back again. Installing regular bolts and tightening
them with a wrench worked better, for a while, but I now have a stripped out
threaded hole on one side and I am either going to have a local machine shop
install a steel thread insert in those bolt holes or bore them out to 8 mm and
rethread them or ask you to send me new ones and possibly then file down the
plate that holds the bottom part of the bearing and the upper part of the
bearing. Not sure how you can fix this problem permanently, but you need to do
something since this is a major annoyance. Right now I think the telescope
would be better off without the folding bearings since it's not really that
much taller when they are up for use and you wouldn't have the problem with use
- just perhaps a transport problem. Maybe you could sell both - fixed bearings
for those who don't want to use a bumpy telescope and folding bearings for
those who don't mind using a bumpy telescope.

2. The next major problem is the azimuth bearing. It moves too easily and while
you do provide a brake, once I tightened it so that the telescope would move
with the correct resistance, I always had a slight jerk when I pushed or pulled
the 'scope since it would hang just a bit before I overcame the resistance of
the brake. Yes, perhaps I had the brake too tight, but there is really no easy
way to adjust the tension on it as is. So throw the current bearing away and
replace it with something more traditional like 3 teflon pads and a formica
bearing.

Other, "medium" severity (in order of severity, in my opinion), mechanical
problems:

1. The springs for the mirror cell are too weak. Adding three more for a total
of six as you told me earlier is NOT what I consider to be a good solution as
that adds complexity (more parts you must install and can be lost). And there
are springs available with the proper strength so this shouldn't be a problem
and you shouldn't ship any more telescopes until you fix this (since it's such
an easy fix). I did find some of the proper strength, but they were too long
and so I cut them to the correct size and I now have proper support for the
mirror cell.

2. You need to make and sell a stray light baffle for the telescope that can be
easily attached opposite the focuser without tools. Since I had just moved
again, I didn't have a lot of time before I went on vacation to fabricate one,
but I did manage to make a simple one out of some thin black syrofoam that I
bought at a hardware store that sold aquarium supplies, cut it to the proper
shape and  attached it with a large stretch band that I found in a store that
sold rugs. Now when you make the light baffle, it should be large enough to
cover above and below the upper ring that the focuser is attached to, since
with a properly made one at a dark sky site you are not always going to need
the shroud. Understand what I mean? The ones Kohki in Japan sells, I consider
to be too big and they only work properly when the light shroud is attached as
well and this should not be necessary. The proper size and form is something
like a circle or oval or stop sign shaped that can be easily clamped to the
upper ring with two rosette knobs and made out of bendable matte black plastic.
It should also be large enough to cover a good area above and below that ring
and small enough to lay on top of the mirror cell for transport. So either a
two-piece baffle or one that maybe folds for storage. But the proper size is
probably just about the size of the rocker box. If it's too big it will catch a
lot of wind and send the telescope spinning. So big enough to stop most stray
light and small enough to store on top of the mirror cell for transport. And it
should be attachable without removing any screws/bolts since you can lose these
in the dark. Please note that I did not say "loosening any screws", I said
"removing any screws". This light baffle should also be standard equipment with
the scope and included in the price.

3. The feet on the azimuth bearing must be replaced with something more robust
like a thick rubber or plastic (or even wooden) conical- or spherical-shaped
furniture foot. One of the feet on my telescope broke off after I had sat the
telescope in the trunk of my car and slid it forward so it was against the back
seat to secure it from moving during transport. I then had a real problem
because the hardware stores on the small island of La Palma just don't have a
lot of parts for anything and so I was stuck with considering removing all 3
feet and using wooden blocks or something else so I could use the telescope. I
did later manage, however, with a bit of luck, to get the foot stuck back on
and I could use the telescope again. This fix, though, was just temporary until
I could get the telescope back home and I had to be very careful after that not
to slide the 'scope on it's feet again very much. And it's not easy to move 30
kg of telescope bent over the trunk of your car, especially if it is a station
wagon with a large trunk.

4. A "proper" mirror cover, which goes down over the mirror, is needed. The one
I bought from you for $40 or so is just a piece of square plastic sheet that
can be bought elsewhere for about $5 (yeah, thanks for that), has no handle or
no way to attach it to the 'scope for transport. It just lays there. So if it
is windy and you remove the truss tubes/arms you can expect the current mirror
cover to blow away or at the very minimum slide off the top. A really good one
would be round and have a good-sized "lip" on it like a plastic garbage can
cover that you could place directly over the mirror (with slots cut out of it,
naturally, for those rubber mirror bumpers). Then it would stay in place and
protect the mirror a lot better than the current one. Do you know anybody there
in Hong Kong that makes plastic garbage can covers?

1. Cut slots in the bottom ends of the truss struts so the struts can be
installed and removed without removing the attachment bolts.

3. Some kind of secondary mirror cover would be nice, if it was included.
Currently I am using a plastic bag, and this works ok, but its better if the
manufacturer includes one.

and that's it. Take another look at the scope and see if it still has the same problems.