Power and Aperture in Binoculars 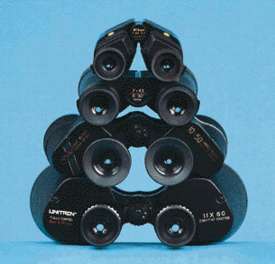 The astronomical performance of binoculars can be rated at a glance. Just multiply the power (the first of the two numbers in a designation like '8 x 50') by the aperture (the second number, given in millimeters). The product is the visibility factor, according to Roy L. Bishop.

We've said it before: if you're interested in astronomy you ought to keep a pair of binoculars handy, no matter what other instrument you may have. Binoculars are the ideal "small telescope" with their wide field, low cost, simple use, total portability, and their respectable performance about halfway between that of the naked eye and a 6- to 10-inch scope used at 50 to 100 power.

That's only part of the story, however. Magnification should get more attention than it usually does. In fact, when it comes to determining how much binoculars will show in the night sky, power counts exactly as much as aperture.

That, at least, is the radical conclusion drawn by Roy L. Bishop, former editor of the annual Observer's Handbook of the Royal Astronomical Society of Canada (RASC). Bishop analyzed what's important in celestial binoculars, especially under today's light-polluted skies, and came up with an all-purpose "visibility factor." A binocular's night-sky performance, it turns out, is most accurately rated in a very simple manner. Just multiply the aperture times the power. That's the visibility factor.

"In fact," Bishop told an audience at the RASC's 1993 General Assembly, "It's engraved right there facing you on the back of the binoculars."

A pair of 7 x 50s, for instance, gets a rating of 350. This means 7 x 50s actually perform a little less well for astronomy than smaller 10 x 40s, which get a visibility rating of 400. Such a claim flies in the face of decades of conventional wisdom. "But," noted Bishop, "it agrees with my own experience."

Nobody questions that high power helps on objects that demand fine resolution, such as close double stars, Jupiter's moons, lunar details, and resolving stars in open clusters. But as Bishop points out, it also helps on traditionally low-power objects such as very dim galaxies and faint, unresolvable clusters.

The reason is sky brightness, especially in light-polluted areas. Telescope users know that switching from low to high power will gain you a magnitude or more of faint stars. This works because high power reduces the surface brightness of the entire field by spreading out the light. Doing this dims the sky background without affecting the total amount of light arriving from small, discrete objects.

Stars appear so tiny that their surface brightness hardly looks changed at high power. But even an already dim, diffuse galaxy won't be rendered any less visible when its surface brightness is lowered (at least within reasonable limits), because the galaxy's contrast with the sky remains the same. You're actually likely to see it better, because your eye perceives low-contrast objects better when they are large. The neural network in your retina is smart enough to gather and correlate the galaxy's light from a wide area. Deep-sky vision is quite different in this regard from the behavior of "dumb" photographic film, which responds to surface brightness only.

Several other factors also make high power good for astronomical binoculars. The first is the size of your eye's pupil. Any optical instrument you look through should have an exit pupil no larger than your eye's own dark-adapted pupil, and preferably somewhat smaller, if you want to use the instrument to full advantage. The exit pupil is the little disk of light you see floating in the air just behind the eyepiece when you look at it from a foot or so away. (Point the instrument at a bright surface, such as an indoor wall or the daytime sky.)

To find the exit pupil's diameter, just divide the aperture by the power. For instance, 10 x 50 binoculars give a 5-millimeter exit pupil.

It was long repeated that the best exit pupil for night work is 7 mm in diameter, because this is how wide the eye opens in dim light. No more. Many people's pupils open no wider than 5 mm, especially by middle age or later. In this case part of the aperture is wasted, exactly as if you put aperture stops over the front lenses. Some of the light beam just won't fit into your eyeball.

Even if you are blessed with 7-mm or larger pupils at night, you really don't want to use their outermost edges. The edges of most people's pupils have uncorrectable optical aberrations in the lens and cornea; these add flares and rays to stars. Moreover, light coming through the edges of your pupil is perceived as dimmer than the same amount of light coming through the center — perhaps evolution's way of suppressing the flares and blurring somewhat. In addition, you have to keep your eye precisely aligned with the instrument or, once again, you'll block off aperture (see A Pupil Primer at the bottom of the page).

Five-millimeter exit pupils are better, by and large. You won't see the dense splendor of a richest-field Milky Way as viewed by very young eyes, but you'll gain in most situations. To shrink the exit pupil, raise the power.

High power in binoculars does have its drawbacks. The first and worst is that it magnifies the wiggling of your hands. For this reason I find 10x about the limit for hand-held binoculars. Even 6x glasses offer vastly increased sky performance if you can brace them rigidly against something or mount them on a tripod.

Second, high power narrows your field of view. The 5° field in typical 10x binoculars encompasses only half as much sky area as the 7° field in 7x glasses with similar eyepiece design. A wide field is a big help, especially for beginners trying to match what they see to patterns on a star atlas.

Third, high power magnifies optical aberrations and misalignments. If budget binoculars give stars annoyingly obvious spikes and flares, why magnify the problem? Fine performance even at moderately high power is one of the reasons why quality is crucial in binoculars intended for astronomy.

Finally, don't imagine that you can get the best of all worlds by buying variable-power zoom binoculars. Such instruments are expensive compromises at best and sloppy kludges at worst. They never seem to perform as well as glasses that were designed for a specific power from the outset.

Of course, there's more to a binocular's performance than its power-times-aperture rating. Highly desirable are fully multicoated lenses and prisms; these increase light throughput by about a third compared to bottom-of-the-line "coated" optics, and they reduce internally scattered light by a much greater factor. Top-quality optics and mechanical integrity are also well worth a higher price.

But none of this is meant to discourage. Any binoculars you may have, whatever their limitations, will open up a lifetime of sky exploration when used with a good star atlas and observing handbook. Their capabilities seem especially marvelous when you consider that for thousands of years, astronomers drew all their knowledge and inspiration from the ridiculously tiny 1 x 7 binoculars (more or less) that they were born with.

Hi Alan..A big factor I've found too is stabilization. I have a Canon 10x30 IS stabilized set. With their excellent optics and the stabilizing, I think they outperform their factor of 300. Great article..David

Hi dkleaphart,
I agree. For me I prefer a pair of binoculars with Image Stabilization even though I have unit tripod mounted. I find that sometimes external forces (e.g., wind) can affect my viewing, and that any movement gets picked up and translated into a shaky image especially at higher magnifications.