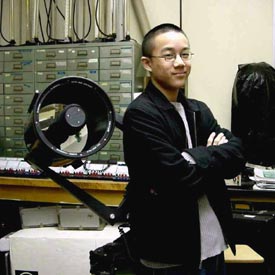 Albert Lin is seen here with one of his school's telescopes. Kim won the 2002 National Young Astronomer Award with a project involving the Chandra X-ray Observatory.

This year's winner is Albert King Lin, a senior at St. Francis Preparatory School in Fresh Meadows, New York. Lin's prize-winning research project is entitled, "A Survey of the Public Chandra Data Archive in Search of Serendipitous X-ray Pulsars: A Systematic Approach." His advisor for the study was Eric Gotthelf (Columbia University).

For most of his junior year and through the following summer, Lin searched through nearly 120 archived Chandra X-ray Observatory observations, looking for pulsars hiding in the various astronomical fields. His efforts uncovered four possible new fast-pulsing objects, which he hopes to follow up on in the coming months.

Lin's first place prize includes a 10-inch LX-200 GPS telescope donated by Meade Instruments Corporation. He also receives a complementary membership to the International Dark-Sky Association and a lifetime pass to the McDonald Observatory, courtesy the University of Texas. He will receive his award at the Astronomical League's 55th annual convention, held this year in Salt Lake City, Utah.

Lin will attend Carnegie Mellon University in the fall and plans to study mechanical engineering.