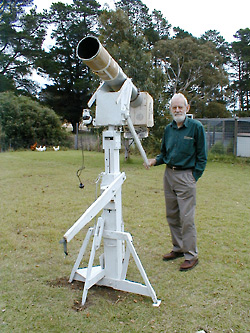 Veteran comet hunter William A. Bradfield with one of his comet seekers: a homemade 150-millimeter (6-inch) f/5.5 rich-field refractor on an altazimuth mount. To date, Bradfield has discovered 18 comets.

Two Australians will share the sixth annual Edgar Wilson Award for amateur comet discovery. According to IAU Circular 8372 issued by the Central Bureau for Astronomical Telegrams last July 12th, the winners are Vello Tabur (Wanniassa, Australian Capital Territory) for discovering C/2003 T3 and William A. Bradfield (Yankalilla, South Australia) for C/2004 F4. In addition to the honor and prestige associated with the award, each winner receives a plaque and a cash prize typically worth several thousand dollars.

Established in 1998 in memory of American businessman Edgar Wilson, the award is given to amateur astronomers (or professional astronomers acting in an amateur capacity) who, during the 12 months preceding June 10th each year, find one or more new comets using amateur, privately owned equipment. Those comets discovered using professional equipment or data do not qualify.