A record-breaking black hole lurking at the center of a compact galaxy weighs about 17 billion Suns, a new study finds. Now astronomers are wondering: how did such a small galaxy come to harbor a leviathan? 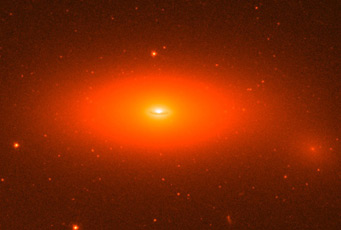 Hubble snapped this picture of the small, compact galaxy NGC 1277. Half the galaxy's light is contained within 5,000 light-years, making it about a quarter the size of the Milky Way. Yet at its center lurks one of the most monstrous black holes ever found, weighing as much as 17 billion Suns.

Immense gravitational power is what betrays the presence of supermassive black holes in the centers of galaxies. These invisible monsters, tiny in size though not in mass, can gather and superheat immense amounts of blazing gas or whirl stars around a galaxy’s center at extraordinary speeds. Still, despite their power, central black holes are generally a minor constituent of their host galaxies. The standard rule is that they weigh a thousandth as much as the galaxy’s central bulge of stars.

Now astronomers have discovered a major exception to that rule. Remco van den Bosch (Max Planck Institute for Astronomy, Germany, and University of Texas, Austin) and his colleagues announced this week in Nature their discovery of a monstrous black hole weighing 60% of its galaxy’s bulge mass — 600 times more than it should.

Van den Bosch’s team started out surveying hundreds of galaxies with the giant Hobby-Eberly Telescope in Texas. They found six relatively compact galaxies that were similarly peculiar, with stars in their centers zipping along as speedily as 400 km/second (900,000 mph). Such speeds imply the presence of an extremely massive object in each galaxy’s center.

One of these galaxies, NGC 1277 in Perseus 220 million light-years away, had already been imaged in archival Hubble Space Telescope observations, so van den Bosch and his colleagues were able to measure the mass of its central black hole using a well-known technique. (They plan to follow up on the other galaxies using future observations.) They modeled the galaxy as a conglomeration of simulated stars in various orbits, then adjusted the model until it reproduced Hubble’s observations.

The video below shows van den Bosch’s animation of three of these stellar orbits: one star orbits as part of the galaxy’s disk (green), another is farther out (blue), and a third near the center is strongly influenced by the black hole’s strong gravitational pull (red). Every second in the animation represents 22 million years.

Van den Bosch’s team found that the black hole at NGC 1277’s center must weigh about 17 billion Suns to reproduce the observations, making it one of the heaviest black holes known. That result might make sense if the black hole lived in a giant elliptical galaxy. Astronomers have long observed that most supermassive black holes grow in lockstep with the bulges of their host galaxies, so bigger galaxies host proportionally bigger holes. Astronomers still don’t know exactly why — maybe galaxy mergers grow both the black hole and its host galaxy in parallel. Or maybe winds or jets emanating from the black hole’s immediate neighborhood blow away a growing galaxy’s gas in some kind of feedback loop that links the growth of both. But even though NGC 1277 hosts a monster of a hole, it’s not a giant elliptical galaxy. It’s shaped like a disk with a large central bulge, like a Frisbee with a tennis ball in the middle, and it’s just a quarter the size of the Milky Way. Somehow, the black hole grew enormously while the galaxy around it didn’t. “This paper is a milestone in our understanding of black holes and how they evolve together (or not) with their host galaxies,” says John Kormendy (University of Texas), who was not involved in the study. “We can be sure that galaxies know something important that we still need to learn.” If NGC 1277 is an exception to an important rule of galaxy evolution, it’s not the only one. Other galaxies have been discovered with unusually massive black holes, such as NGC 4486B in Virgo, whose black hole has about 9% of the mass of all the stars in the galaxy, and NGC 4342 in Virgo, whose black hole has 2.6% of the mass of its galaxy’s bulge. Still, NGC 1277 is by far the most extreme example. “There are more and more hints that, in the earliest days of the universe, at least a few black holes grew monstrously big very quickly,” explains Kormendy. “And at least some of these black holes grew big before the galaxies they lived in grew big too.” “Our best guess,” Kormendy adds, “is that NGC 1277 and galaxies like it are rare remnants in the modern universe of these black holes that grew up before their galaxies did.” And in the case of NGC 1277, the galaxy never caught up.

What did the precursor galaxy look like? Could it be the massive black hole has simply grown to the point it's gravity well encompasses most of the mass of the compact galaxy?
What is the result of this ever increasing density on the individual stars slowly falling in to the event horizon?

When we look at the Hubble image of NGC 1277 we see a rather ordinary looking galaxy, with no apparent galactic mega collision remnants or massive jet activity at all. Therefore it seems apparent to me that ordinary, slow methods of accretion cannot possibly account for this very extreme case. UT’s John Kormendy is quoted toward the end of the article, and I like his suggestion that in 1277’s case the SMBH must have come into being first, and then the galaxy formed around it, apparently from a limited amount of material since it’s such a small one. I was also amused by his statement, “We can be sure that galaxies know something important that we still need to learn.” I guess we’ll have to probe them to make them talk. 

The 400 km/s of stars near the center implies a huge mass. It’s not clear why you need a super-computer simulation to draw this conclusion. Astrophysicists have not worked out an algebraic equation for black hole mass based on the velocity of objects going around it?

We want Math! We Want MATH! No really, I’m serious. Peter’s query and post reminded me of a time about 15 or so years ago when I had strayed from the fold, so to speak. I had sadly let my subscription to Sky and Telescope lapse, and naturally I missed it. I was lured by an add for S&T’s competitor (which shall remain unnamed) and I bought a year’s subscription. I missed the nuts and bolts details about the tools we use to view and study the sky, but most of all I missed the mathematical detail in the science articles. So S&T writers and editors please don’t feel you need to dumb down your articles, to put it bluntly. Even for people who may not be proficient in math, seeing the formulas there can bolster the reasoning being presented and can motivate people to learn more about math. Oh, and for Peter, you could apply Kepler’s Third Law: Period=K*average orbital distance for any two of the three orbiting stars and solve for K. Then you can solve for the mass of the SMBH since K=4*pi^2/(G*M) where G is the universal gravitation constant.

Peter, to answer your question, Hubble did not observe any individual orbits of stars. (If it had, the math would have been quite easy, as Bruce points out!) As I stated in the article, what Hubble observed was actually a conglomeration of stellar orbits - I left out the technical term, which is called velocity dispersion. The computer then modeled hundreds of thousands of orbits in order to reproduce the observed velocity dispersion. (The video shows just three examples of the many orbits that go into the model.) In addition to the many orbits, there are a number of parameters that go into this calculation, hence the need for complex computations.

Thanks, Monica. I was aware that the 400 km/s is a dispersion, not an individual star(s) velocity, but it seems like a black hole of a given mass would generate a particular velocity dispersion, much like a black body at a given temperature generates radiation that peaks at a particular wavelength. Planck derived an equation for the latter using statistical arguments and a few simplifying assumptions. It seems like an equation for the former could be worked out using the virial theorem and a few simplifying assumptions. After reading your answer, I realize it’s not that simple, but with the field of astrophysics built on math, I remain incredulous that no equation exists for a black hole’s mass in terms of velocity dispersion. Seems so fundamental.

No one else nailed me for my mistake so I’ll have to correct it myself; Kepler’s Third Law states that the SQUARE of the period is proportional to the CUBE of the average orbital distance, so I should have written P^2=K*A^3. Then since K is also equal to 4pi^2/(GM) if you know both the period and the average orbital distance of an orbiting star the mass of a SMBH would be
M=4pi^2*A^3/(G*P^2)