A Bright Flash in the (Lunar) Night

On March 17th, a space rock slammed into the Moon's Mare Imbrium and created a brief 4th-magnitude flash — the brightest by far recorded to date — that could have been seen by the unaided eye.

Over the past eight years, the observers assigned to NASA's Meteoroid Environment Office have looked at a lot of boring video of the Moon. But every week or so they record a tiny, brief flash caused by a space rock slamming into the lunar nightside.

On March 17, 2013, a 4th-magnitude flash briefly interrupted the lunar night along the southern margin of Mare Imbrium. North is toward right, and the small dark crater near the upper limb is Grimaldi. Here is a NASA video about the event.

On March 17th, the team got very lucky. One of the MEO's 14-inch telescopes sited near the Marshall Space Flight Center in Alabama recorded an unexpectedly bright flare. The second-long flash peaked at about 4th magnitude, meaning it could have been picked up by eye had anyone gazed upon the Moon's fat waxing crescent at that moment.

"If we had been looking at the monitors at the right time we would surely have noticed the impact — but we weren't," recalls observer Rob Suggs, who was working with trainee Aaron Kingery that night. "Since we now have two scopes on good-quality mounts which track the Moon extremely well, we don't have to watch the screens as closely."

The flare remained undiscovered for more than a month until Ron Suggs (no relation) went through the night's observations. "It jumped right out at me, it was so bright," he notes in a NASA announcement issued last week. 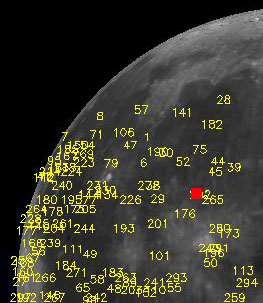 Over an 8-year span, observers with NASA's Meteoroid Environment Office used 14-inch telescopes to record nearly 300 impacts on the Moon. A red dot marks the very bright one on March 17, 2013. Click on the image for a larger view.

Since 2005, the MEO's researchers have recorded more than 300 strikes on the lunar surface, averaging about one hit for every 2 hours of observing. Most of the flash-producing impacts occur during the Geminid meteor shower and a host of other minor ones. The goal is to determine how often space rocks hit the Moon and whether they're from predictable, concentrated sources — the kind of hazard assessment essential for safeguarding future lunar explorers.

But they've never seen anything like the March 17th event, which occurred at 3:50:55 Universal Time. The location, at 23.8°W, 20.6°N, is near the southern edge of Mare Imbrium. "It exploded in a flash nearly 10 times as bright as anything we've ever seen before," notes William Cooke, who manages the NASA effort.

Ordinarily, gauging the impactor's size solely from the flash's intensity and duration involves considerable guesswork. The burst of light isn't created from frictional heating, as happens when meteoroids enter Earth's atmosphere, but instead because even small objects deliver enough kinetic energy to momentarily superheat the lunar rubble where they strike. 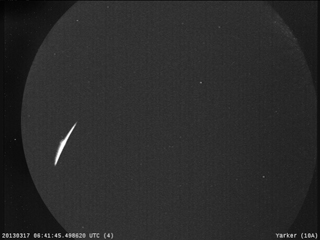 On March 17, 2013, an all-sky camera in Yarker, Ontario, captured this bright fireball about 3 hours after NASA observers recorded an especially bright impact on the Moon.

Luckily, five bright fireballs were captured that same night by all-sky cameras operated at two sites in Georgia by the MEO and in southeastern Canada by researchers at the University of Western Ontario. Calculations suggest that all of those objects were traveling together in highly eccentric orbits that stretched to the inner asteroid belt (with a semimajor axis of 2.25 astronomical units), and that they arrived at 57,000 miles per hour (25.6 km per second).

Cooke believes that the fireballs and the flash in Mare Imbrium were related. So, armed with a rough orbit and some basic physics (E = ½mv2), he calculates that the lunar impactor must have been about the size of a beach ball, 30 to 40 cm across, and that its collision delivered the explosive equivalent of 5 tons of TNT.

Something of that size and mass, hitting that fast, should gouge out a crater 20 feet (6 m) across or even larger. That's big enough to turn up in high-resolution images taken by NASA's Lunar Reconnaissance Orbiter. "We are certainly looking forward to checking out the March 17th event," says Mark Robinson (Arizona State university), principal investigator for LRO's camera. "In that target area there is about 80% preexisting coverage, so it looks possible."

Meanwhile, Cooke thinks March 17th's cluster of strikes might be related to a little-known meteor shower called the Eta Virginids (or Northern March Virginids). "We'll be keeping an eye out for signs of a repeat performance next year," he says.

Darn, I wish I had been looking at the Moon at that moment! The NASA announcement linked in Kelly's article has an interesting video about the meteoroid monitoring program with footage of this particular strike. You could also go to youtube and search for "lunar meteor impact". 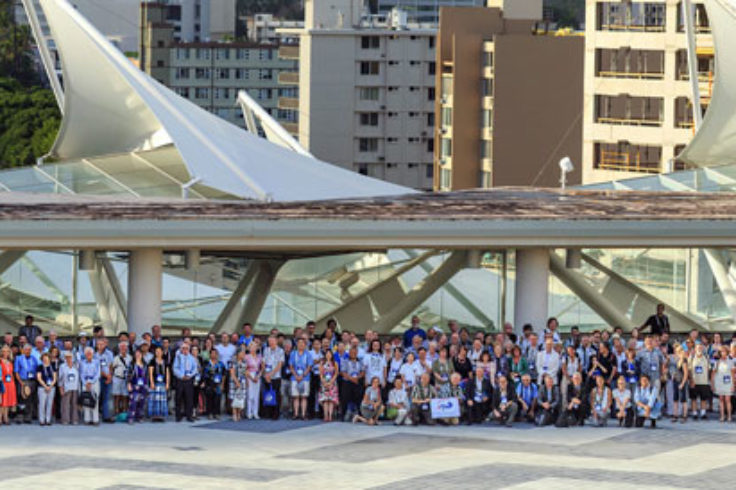 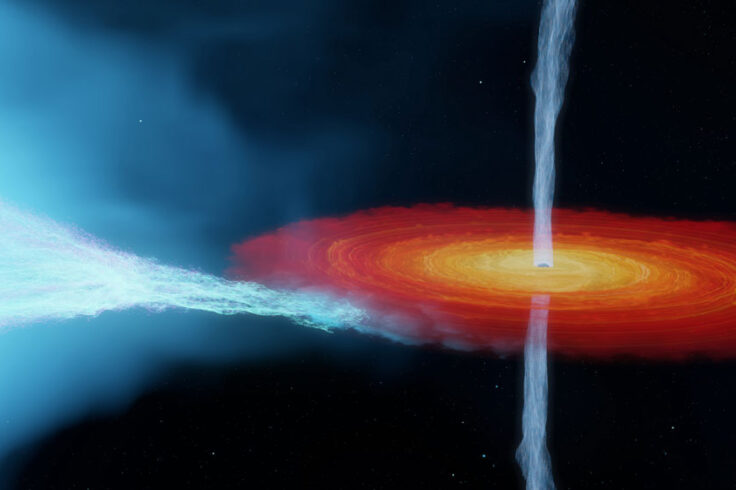 First-detected Black Hole is More Massive Than We Thought