A Case for Frozen Hydrogen

The thin gas between the stars contains hydrogen in three known forms: as an ionized plasma where it’s hot, as neutral atomic hydrogen (H) where it’s cooler, and as molecular hydrogen (H2) in dense clouds where it can grow cold. But can it ever chill far enough to freeze into solid chunks or “snow” particles? It’s an old idea that a team in Australia has just revived. 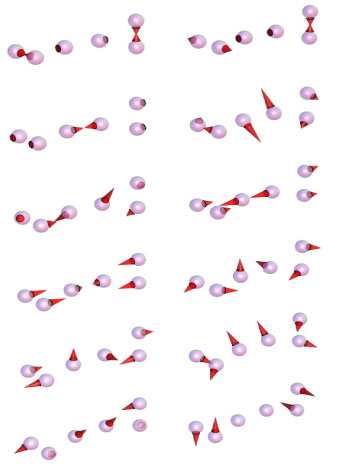 The possibility was proposed in the late 1960s. But it didn’t get far because astronomers thought that various forms of cosmic radiation would keep even the darkest, coldest cores of interstellar clouds from chilling down far enough. Even if hydrogen did freeze in certain isolated pockets, researchers believed that it would soon sublimate back to gas.

But an analysis released last month by a trio of scientists at the National University of Australia in Canberra and at Manly Astrophysics resurrects the case for solid frozen hydrogen. The researchers argue that the high-energy radiation in the interstellar medium might partially ionize molecular hydrogen to produce H6+, which can freeze at higher temperatures than common H2).

“This molecule was only recognized in laboratory studies within the last decade or so, and nobody in the astronomy community knew about it,” said Mark Walker, one of the authors of the paper. The authors further suggest that some of the hydrogen will present itself as deuterium, spawning a large number of (HD)3+ ions in addition to H6+ ions.

The team has not directly identified these species in the interstellar medium. But they’ve analyzed the spectral properties the two molecules ought to have, using computational models, and they suggest a method to search for them as spectral features in starlight.

One of the first images of the Diffuse interstellar bands taken after observations at the Observatoire de Haute Provence shows their relative strengths.

When starlight is separated into all its component wavelengths, many dark lines appear in the light’s infrared, visible and ultraviolet spectra. Most of these absorption lines arise from specific atoms absorbing specific wavelengths in a star’s own atmosphere. But a few dark lines arise from material spread along the long interstellar highway between the star and Earth. In particular, about 600 interstellar absorption lines form the mysterious diffuse interstellar bands (DIBs), caused by unidentified molecules in the interstellar medium. In addition to these mystery lines, the interstellar medium produces emission bands called the unidentified infrared (UIR) bands.

Since the late 1980s and early 1990s, increasing circumstantial evidence has suggested that large molecules such as polycyclic aromatic hydrocarbons (PAHs) produce the UIRs. The probable candidates have been analyzed in cold, near-vacuum laboratory conditions, and various models demonstrate that these molecules indeed exhibit vibrational transitions at the wavelengths of UIRs in interstellar spectra. Astronomers have thought that if these molecules could be responsible for UIRs, they probably produce the DIBs as well.

But the work of Ching Yeh Lin, Andrew T. B. Gilbert, and Walker argues that UIRs are probably produced not by PAHs but by (HD)3+ and H6+ in solid form. The team provides computational models to show that these ions have vibrational transitions at wavelengths matching some of the UIRs. Future research could demonstrate evidence for the entire set of UIRs noted in stellar spectra, says Walker.

Benjamin McCall (University of Illinois), a Sky & Telescope contributor who studies the interstellar medium, thinks the new work could be significant if the authors can prove their speculations in further research. “If even the major claim [that (HD) 3+ in solid hydrogen is responsible for the UIRs] is true, it will be incredibly revolutionary,” he says. 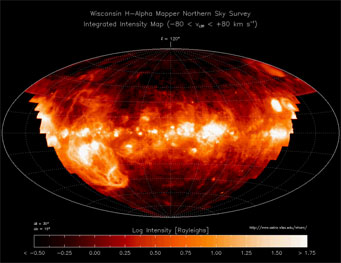 Ionized gas in the Milky Way Galaxy, observed by the Wisconsin H-Alpha Mapper (WHAM) as part of the Northern Sky Survey.

However, the research by Lin, Gilbert, and Walker has also found strong criticism. Louis Allamandola (NASA/Ames Research Center), who works on PAHs, says, “This level of computation should be reasonably reliable in the infrared, but it needs to be taken with a grain of salt.” He points out that most of the UIRs originate in ultraviolet-rich regions of the interstellar medium where the temperature might be too hot for any form of hydrogen to freeze.

He and colleague Scott Sandford also argue that the laboratory evidence for PAHs as the molecules causing the UIRs is overwhelming. They consider it unlikely that the same emission bands have an unrelated source in hydrogen ice or H6+ ions. “I suppose H6+ could potentially explain a DIB or two, but there are hundreds of DIBs, and it strikes me as unlikely that H6+ would explain them all, or even many of them,” explains Sandford. However, he and Allamandola agree that there is room for debate.

McCall thinks the interstellar medium could contain both types of molecules. “This paper is not a slam-dunk for (HD)3+ causing the UIRs," he says, "and even if it is true that (HD)3+ causes them, that would not rule out the presence of PAHs.”