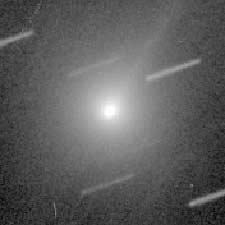 Comet Kudo-Fujikawa is seen here in this CCD image taken on December 15, 2002 from Las Cruces, NM, about a day after its discovery.

Early on the morning of December 14, 2002, Japanese amateur Tetuo Kudo was searching the skies with his giant 20 x 120 binoculars. While scanning the constellation Hercules, he spotted something new — a fuzzy 9th-magnitude glow moving slowly east-southeast. Follow-up observations by Kadota (Saitama, Japan) confirmed the object and revealed a short tail about 1/3° in length, pointing
away from the Sun.

The comet (C/2002 X5) was announced on International Astronomical Union Circulars 8032 and 8033, and has been officially named Comet Kudo-Fujikawa.

A preliminary orbit calculated by Brian G. Marsden of the
Minor Planet Center in Cambridge, Massachusetts, indicates
that this comet is headed for perihelion in late January, 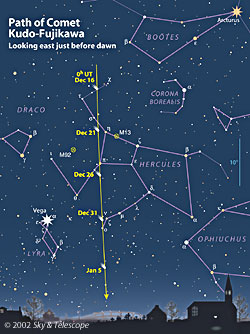 Binoculars should be all you need to spot the new comet just before dawn in the last two weeks of December. (You can find when dawn begins at your site by entering your location into our almanac.) Start with the bright landmark stars Arcturus (top right) and Vega (lower left). The sky's position with respect to the horizon is shown very approximately. This horizon is drawn for skywatchers at 40° north latitude when dawn begins around the end of December. Before that date the comet will be less high than shown here; after that it will be higher than here. Stars are plotted to magnitude 6.8.

when it will pass well inside the orbit of Mercury and may brighten considerably. Unfortunately, it will then be almost directly behind the Sun as seen from Earth, hence virtually impossible to observe. Before that time, Northern Hemisphere observers should be able to follow the comet with binoculars in the morning sky through mid-January. Skywatchers in the Southern Hemisphere are in a position to see it emerging from the Sun's glare in late February, in the evening sky.

Currently the comet is about 7th magnitude, making it a viable binocular object for amateurs. It could be 6th magnitude or brighter by the year's end. Contributing editor Steven James O'Meara, observing from Volcano, Hawaii, on the morning of the 16th, reported the comet as being "Magnitude 7.8. Bright, easy target — could have been discovered from a city with a small telescope. Could not confirm a tail." 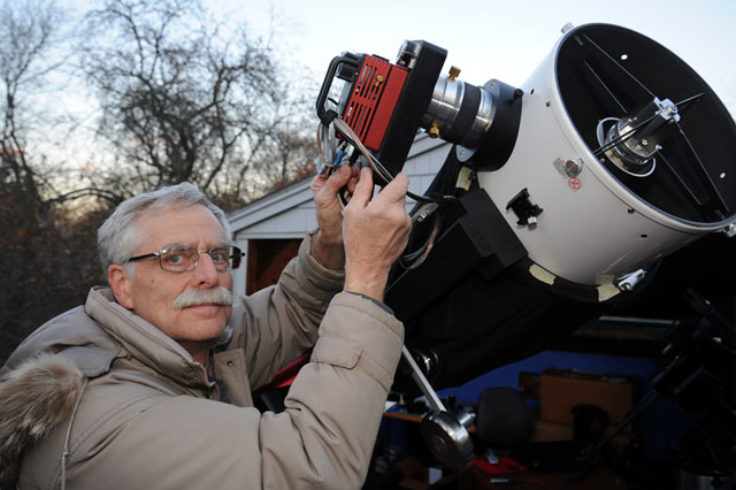 Work to Save NASA's "Mole" on Mars Continues