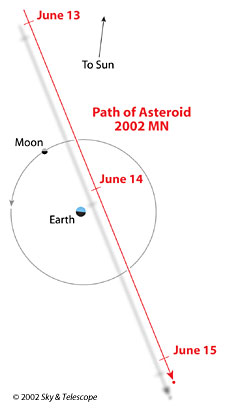 Hurtling out of the “blind spot” between the Sun and crescent Moon, asteroid 2002 MN skimmed about 120,000 kilometers above the Earth’s surface during the early hours of Friday, June 14th. Nobody saw it until three days later, despite the fact that it penetrated to within 30 percent of the Earth-Moon distance. The trajectory is labeled at 0 hours Universal Time on successive dates.

On June 17th, astronomers from the Lincoln Laboratory Near Earth Asteroid Research project (LINEAR) discovered a new Earth-crossing asteroid. Designated 2002 MN, the object is approximately 100 meters across and flew by us on June 14th.

What is most shocking is just how close it came to Earth. This is only the sixth known asteroid to penetrate the Moon's orbit, and by far the biggest. According to Brian G. Marsden (Harvard-Smithsonian Center for Astrophysics), the object came within 120,000 kilometers (0.0008 astronomical unit) of impacting Earth.

Though the exact details of an impact scenario depend on the rock's composition, had it hit Earth the event would have been "Tunguska-like," with a force rivaling the largest H-bombs. The object was too small, however, to be classified as a potentially hazardous asteroid (PHA). Nor does it qualify for the Torino scale used to predict the devastation caused by an impacting asteroid.

A disturbing detail is that 2002 MN was discovered three days after its closest approach. Though we are almost certainly out of harm's way from this near Earth object (no potential impacts are forecast until at least 2050), its late detection may be telling. Currently there is no dedicated Southern Hemisphere NEO search program, and NASA is currently focused on finding bodies greater than 1 kilometer across.

Regardless of whether or not it should have been seen, "it was a close shave," says Marsden.