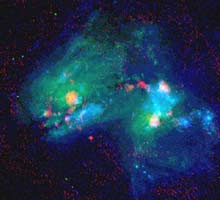 This false-color view shows the two merging galaxies of Arp 299, some 140 million light-years distant in the bowl of the Big Dipper. Radio emission is shown here as red, infrared as green, and ultraviolet as blue. Such collisions, causing rich bursts of star formation, were abundant in the universe's early ages.

Astronomers using a worldwide array of radio telescopes have delved deep into a galaxy and found what they're calling a "supernova factory" — a superdense star-forming region that has more in common with the ancient early universe than with most galaxies today.

The observations, announced yesterday at the American Astronomical Society meeting in Nashville, uncovered five very young supernova remnants — one less than 13 months old — in a dense young star cluster in the pair of colliding galaxies known as Arp 299. The star cluster, 350 light years wide, seems to produce a supernova every 2 or 3 years. By comparison, our entire Milky Way produces one only one every century or so.

To uncover the supernova bonanza, Susan G. Neff (NASA/Goddard Space Flight Center), James S. Ulvestad (National Radio Astronomy Observatory), and Stacy Teng (University of Maryland) used the resolving power of the Very Long Baseline Array, a network of ten 25-meter radio telescopes spaced around the globe that resolved details as small as 1 milliarcsecond (the angle that would separate a car's headlights at the distance of the Moon). Supernova explosions create expanding bubbles of ionized gas that emit copious radio waves.

Supernovae of the kind happening here result from massive stars imploding at the ends of their very short lives. So the supernova nest in Arp 299 must be creating massive stars at a furious rate; the astronomers estimate that the cluster contains up to a million stars in all. "We theorize that these [sites] are where most of the galaxy's stars are forming," says independent commentator Daniel W. Weedman (Cornell University). "[We know] there are short-lived massive stars [in Arp 299] because we see them blow up." This observation, Weedman adds, "is the most direct possible confirmation of the theory of starburst galaxies."

Watching many supernovae go off also provides information about the dynamics of how the stars formed in the first place. "If you can see many blow up, you can learn details about the stars in the starburst," says Weedman.

Co-investigator Ulvestad says, "the supernova factory in Arp 299 gives us a closeup look at the galaxy mergers and star-formation conditions that were very common in the early universe." Galaxy collisions resulting in star-formation bursts were common in the universe's early ages but are relatively rare today. In particular, the supernova nest in Arp 299 may offer a good look at the birth of a globular cluster. We see most of these giant swarms lying quiet and serene many billions of years after star formation within them stopped.

Arp 299's stellar nursery was elusive; like many starburst sites, it is deeply buried in opaque dust. Only at radio wavelengths can astronomers see what is happening, and even then the observation pushed the limits. In fact, the VLBA had to be paired with the much larger collecting area of the new 100-meter Robert C. Byrd Green Bank radio telescope in West Virginia to make the initial supernova-remnant discoveries.

"This was a challenging observation that couldn't have been done a year ago because the technology didn't exist," says
Weedman. 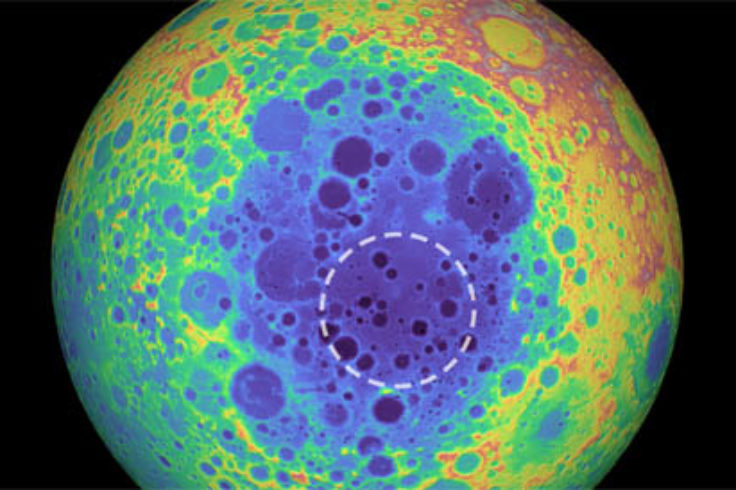 Did a Comet Swarm Kill the Dinosaurs?