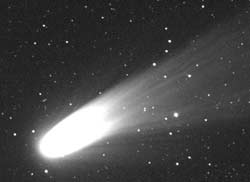 The impressive resurgence of Comet LINEAR (C/2000 WM1) is evident in this two-image composite by Australian observer Terry Lovejoy, who captured the cosmic visitor as it graced the predawn sky at 17:33 Universal Time on January 31st. At the time, the comet's coma shone at magnitude 2.9 — making it easily visible to the unaided eye despite strong moonlight — and the tail was more than 1° long. He used a 530-mm f/3.3 Takahashi reflector and a Genesis-16 CCD camera to record this two-image mosaic.

One week after passing perihelion 83 million kilometers from the Sun, Comet LINEAR (C/2000WM1) decided to put on a tremendous show for skywatchers in the Southern Hemisphere, where it is now visible. Over just three days beginning January 27th, the comet brightened dramatically from magnitude 6.2 to 2.3 — a 35-fold increase.

Despite the hindrance of a nearly full Moon on January 30th, Australian observer Michael Mattiazzo could trace an arching tail more than 2° long. Before dawn this morning, Argentine skywatcher Luis Alberto Mansilla reported that the comet's coma was large and highly condensed toward its starlike center. He notes that the broad, strongly curved tail "resembles a version of Hale-Bopp." These and other observing reports appear on Charles Morris's comet observation Web site.

Unfortunately, the outburst has already passed its peak, as Mansilla estimates that the comet's magnitude has already fallen to about 4.1. Moreover, this is a "Down Under" spectacle: the comet's current declination (-45°) puts it well below the horizon for northern observers. Although Comet LINEAR is gradually moving northward through southernmost Sagittarius, it will likely have faded below naked-eye visibility by the time it climbs much farther north later this month.