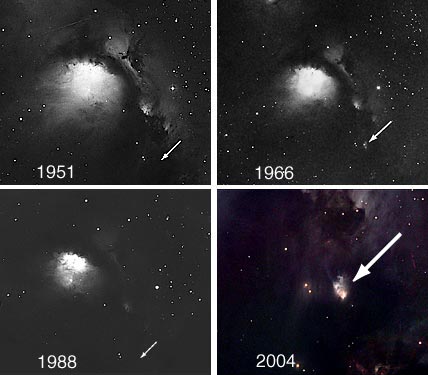 McNeil's Nebula, discovered in January, has made itself known at least once before. How long this outburst will last remains unknown.

Amateur astronomer Jay McNeil's January 23rd discovery of a newborn nebula near Messier 78 is proving to be even more intriguing than first thought. John Welch of Phoenix, Arizona, noticed that McNeil's Nebula actually appeared once before — in an old Sky Publishing title, The Messier Album by John H. Mallas and Evered Kreimer (1978). That book contained a 15-minute white-light image taken by Kreimer on October 22, 1966, which was first published in Sky & Telescope in January 1970 (page 27).

From images obtained from the S&T archives, it now seems that this nebula has been playing peekaboo for quite some time. A Palomar Observatory sky survey plate of M78 taken through a red filter on November 29, 1951 shows no evidence of the nebula. Kreimer's shot in 1966 reveals the object as quite prominent, appearing as bright or brighter than it currently does in the sky. On October 15, 1988, Kim Zussman took a 90-minute exposure that turned up nothing. Other images suggest the latest "I see you" event began in late 2003.

Sky & Telescope is asking for your help to track the history of this nebula. Please send any scanned images you may have of M78 to us at editors@SkyandTelescope.com. Please include as much information about the image as you can — most importantly the date of the observation. Any documented image whether or not it shows McNeil's Nebula is valuable. The older the image, the better. Of particular interest are images taken in the 1960s and 70s.

We will continue to update this site as news merits.