A Daily Dose of Mars 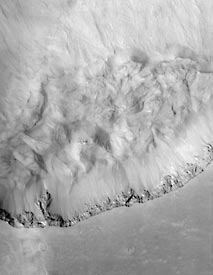 Move over Astronomy Picture of the Day! As of last week, you can now take your morning coffee break with the latest picture of Mars.

At 10 a.m. Eastern time, Monday through Friday, a fresh view of the red planet taken by the Mars Odyssey 2001 spacecraft's Thermal Emission Imaging System (THEMIS) will be posted to the Web site of the instrument's investigators. THEMIS can image the surface at 15 wavebands of infrared and visible light. Although the visible-light views each weekday won't be fully calibrated for scientific use, they will be processed to clean up camera effects and compensate for the spacecraft's motion.

The first week's worth of pictures includes a crater rim, a sinuous valley, and the debris from a canyon-wall landslide. Each swath reveals details as small as 18 meters (60 feet) across.

Odyssey entered Martian orbit on January 29th and began mapping the planet in mid-February. Researchers presented the first images four weeks ago. The spacecraft is expected to take some 15,000 images of the surface during its 2½-year-long mission to map Mars's mineralogy.