A Happy Halloween for Hubble 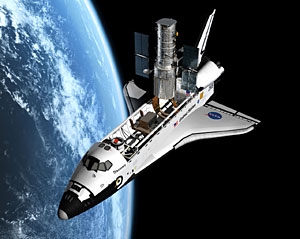 This artist's impression shows the Space Shuttle with the Hubble Space Telescope berthed in its cargo bay during the servicing mission now scheduled for 2008. Astronauts will replace batteries and gyroscopes to ensure that Hubble can function for another 5 to 10 years and will increase the observatory's scientific capabilities by installing the Cosmic Origins Spectrograph and the Wide Field Camera 3.

On the eve of the Day of the Dead, NASA administrator Michael Griffin gave the Hubble Space Telescope a new lease on life by announcing that Space Shuttle astronauts will visit the observatory in 2008 to replace worn-out parts and install powerful new scientific instruments. The servicing mission will enable Hubble to continue producing landmark astronomical discoveries until 2013 and perhaps longer. Without servicing, Hubble is doomed to die a slow electronic death in the next two to three years as its aging batteries lose their ability to hold a charge.

Griffin traveled from his Washington, DC, office to the Goddard Space Flight Center in nearby Greenbelt, Maryland, where he spoke to a rapt audience of Hubble scientists and engineers, many of whom have been working on the project for decades. "We are going to add a mission to service the Hubble Space Telescope to the shuttle's manifest before it retires," said Griffin, and the crowd rose to give him a standing ovation. Only three years ago, many of these same folks were in mourning when Sean O'Keefe, Griffin's predecessor, canceled plans to repair and upgrade the observatory amid concerns for astronaut safety in the wake of the Columbia disaster. The new NASA chief chuckled that he was glad to come to Goddard to convey a "much more pleasant decision."

O'Keefe's main argument against returning to Hubble was the unavailability of the International Space Station (ISS) to serve as a lifeboat should something happen to the shuttle during its ascent to orbit. Because the telescope flies in a higher and differently inclined orbit than the ISS, a shuttle damaged en route to Hubble would not have enough fuel to divert to the space station. That's still the case, but as Griffin explained, some key things have changed thanks to the three successful shuttle missions flown in 2005 and 2006.

Using the new extendable boom carried aboard the shuttle, astronauts have demonstrated their ability to inspect the spacecraft for damage and to position themselves securely near any areas needing repair. They've also proven that they can repair any holes in the orbiter's heat shield punched by debris shed during launch — the type of accident that led to Columbia's destruction during reentry. The last piece of the puzzle to fall into place was the ability to have a second shuttle ready and waiting on the launch pad in case a rescue mission is needed — without jeopardizing NASA's plan to finish ISS construction and close down the shuttle program by 2010.

With little time to lose in preparing for the forthcoming Hubble visit, Griffin announced that the mission will be flown aboard the shuttle Discovery and commanded by veteran astronaut Scott Altman, who also led the last servicing flight, in March 2002. Among the space-walking repairmen are Michael Massimino and John Grunsfeld, both of whom joined Altman on the 2002 flight. Grunsfeld, an astronomer and Sky & Telescope author, also repaired the telescope in December 1999, so this will be his third trip to Hubble. Discovery's crew will be rounded out by four rookies: pilot Gregory C. Johnson, space-walkers Andrew J. Feustel and Michael T. Good, and robot-arm operator K. Megan McArthur. 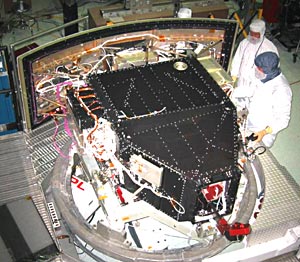 The Wide Field Camera 3, seen here at NASA's Goddard Space Flight Center in Greenbelt, Maryland, will be installed in the Hubble Space Telescope during the 2008 servicing mission. It will complement Hubble's workhorse Advanced Camera for Surveys by recording deep images at ultraviolet, visible, and near-infrared wavelengths.

The astronauts have a long lists of tasks to accomplish during their mission, which will include at least four, and probably five, days of space-walking. They'll install new batteries, gyroscopes, and insulating blankets to restore the spacecraft to near-perfect health and protect it against the harsh environment of space. They'll replace one of three fine-guidance sensors to improve the telescope's ability to track faint guide stars and measure stellar positions with great accuracy. They'll attempt to repair the Space Telescope Imaging Spectrograph, which stopped working two years ago when a power supply failed. Finally, and most importantly for astronomers, the astronauts will install the Wide Field Camera 3 and Cosmic Origins Spectrograph, two powerful new instruments that will expand Hubble's scientific capabilities manyfold.

Griffin ruled out one other task: attaching a deorbit module whose retrorocket would be used to steer Hubble harmlessly into the Pacific Ocean once it finally ceases operations years from now. There's no need to worry about that anytime soon, because NASA's latest forecast shows that friction with the tenuous upper atmosphere won't lower Hubble's orbit enough to threaten an uncontrolled reentry until the year 2020 or later. By then astronauts aboard the Orion crew-exploration vehicle — the one now being developed to ferry crews to the ISS, Moon, and Mars beginning around 2014 — should be able to attach a retrorocket to Hubble. Discovery's astronauts will attach a special grapple fixture to the telescope's aft end to facilitate that future mission.