The planet Mars has not been easy to reach via spacecraft, as this list of missions reveals. 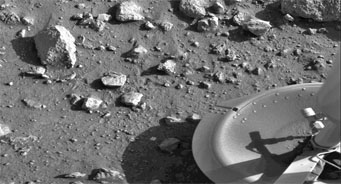 Mars, at last! This is the first image sent by NASA's Viking 1 lander, taken just minutes after the spacecraft touched down on July 20, 1976. One of the lander's three footpads is at right.

Space travel isn't easy. But getting spacecraft to Mars has proven particularly challenging. The success rate for the nearly four dozen missions destined for the Red Planet (or its moon Phobos) is well below 50%.

In the table below, compiled by the editors of Sky & Telescope, green denotes a spacecraft that met its mission objectives, yellow means partial success, and red signifies that something went seriously wrong along the way — often within hours or even minutes of reaching the final destination.