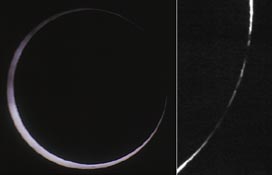 In many cultures eclipses of the Sun serve as portents
of evil or misfortune, but on December 14th the two bodies' juxtaposition
brought clouds and rain to Costa Rica, thwarting millions of Central
American skywatchers who had hoped to see an annular
eclipse. Poor weather doused any chance of seeing the spectacle
from the capital city of San José, and even some climatologically
favored sites were smothered with overcast skies. Two groups of American
scientists on the Guanacaste Peninsula, near the eclipse's centerline,
settled for fleeting glimpses of the event's partial phases. "The weather
was the worst of the week," reports a disappointed Jay M. Pasachoff
(Williams College), as heavy clouds formed after sunrise then hung in
all day.

A few eclipse-chasers lucked out near the event's southern
limit. Paul D. Maley of Houston, Texas, leading the 25th "Ring
of Fire Expedition," dodged clouds up and down the coastline until
a clearing in the sky appeared near Punta Leona just 20 minutes before
maximum eclipse. "This was about as exciting as it can get," Maley says.
"It's the first time I've scrambled like that — and succeeded."
In the same general area was another group of eclipse veterans led by
Vic and Jen Winter and their Swiss
colleague Olivier Staiger. (Staiger's live
Webcast of the event temporarily fell victim to an accidental dousing
of his videocamera.) A little farther south, on the northern end of
Herradura Beach, guests at the Marriott Los Sueños Resort enjoyed
a brief clearing at mideclipse despite a torrential downpour just 90
minutes beforehand.

The rest of Central America was largely clouded out as
well, but clear skies prevailed over much of Mexico, the southern United
States, and northern South America. Floridians had especially memorable
views, as the Moon took its 60-percent bite just as the Sun was setting.