For 12 years the Solar and Heliospheric Observatory — SOHO for short — has stared at the Sun at visible, ultraviolet, and X-ray wavelengths. This is not a particularly safe practice for human eyes, of course, but the spacecraft's sensors can handle all those high-energy photons just fine. A joint project of the European Space Agency and NASA, SOHO has been there to sound the alarm whenever our star erupts and spews huge blobs of magnetized, superheated plasma in Earth's general direction.

But all this time SOHO has been moonlighting as a comet catcher, netting astronomers some 1,350 discoveries. To date, they've all been kamikaze comets — "sungrazers" that race in close and vaporize themselves in a matter of days. 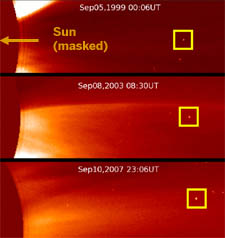 SOHO's latest find is different: it's a repeat visitor first seen in September 1999, and then again in September 2003. Two years ago a German graduate student named Sebastian Hönig realized that the two objects had nearly identical four-year orbits and thus were probably one and the same. He predicted that it would make an encore appearance on September 11th, and it did.

Although Hönig did the spade work, he doesn't get the naming rights. Neither do Terry Lovejoy, the Australian who first spotted the comet in SOHO imagery in 1999; Kazimieras Cernis (Lithuania, 2003); or Bo Zhou (China, 2007). Instead, this new periodic visitor will henceforth be known as Comet SOHO (P/2007 R5). Hey, don't blame me — take it up with the IAU.

You can read more about the discovery at the SOHO website. And if you want to start discovering SOHO comets of your own, just click here every few hours.

Congrats to SOHO for yet another exciting discovery, and making a high of 1350 discoveries! Also sincere congrats to Hönig and other amateurs for doing the orbital calculation work and proving the extent amateurs can still contribute in the cometary field today. Sheesh, we can understand the frustration when they didnt get the naming credit for the comet inspite of doing the groundwork, like Halley and Encke. We really wish for them. 🙁

I had a question here. It is known that comets are perturbed by gravity of planets and especially our massive Sun. There might always be a slight change in orbital period of periodic comets when they come closer to Sun, seldom are they seen to return at 'exact' perihelion time and dates. Is the perihelion date of this comet exactly 4 years returning each September inspite of it being just 0.05 AU to Sun? In this case, does the Sun's gravity change it's orbit, or in-turn 'lock' it in a fixed orbit?

Encke comet has the shortest orbit of 3.3 years, but I believe during each return there is a little lag in it's perihelion time and date, due to the surface jets which act like thrusters. Would it be the case with this as with all other comets?

I checked Hönig's 2005 paper, and the object has an orbit that takes just under 4 years. He also notes that the orbit stretches out to 5 a.u., suggesting that it might be an asteroid that was flung into its current orbit by Jupiter. Since this "comet" has not obvious tail, its own jetting is unlikely to perturb the orbit much. But another brush with Jupiter would change the orbit dramatically — perhaps pushing it into the Sun or flinging it out of the solar system entirely. — Kelly Beatty 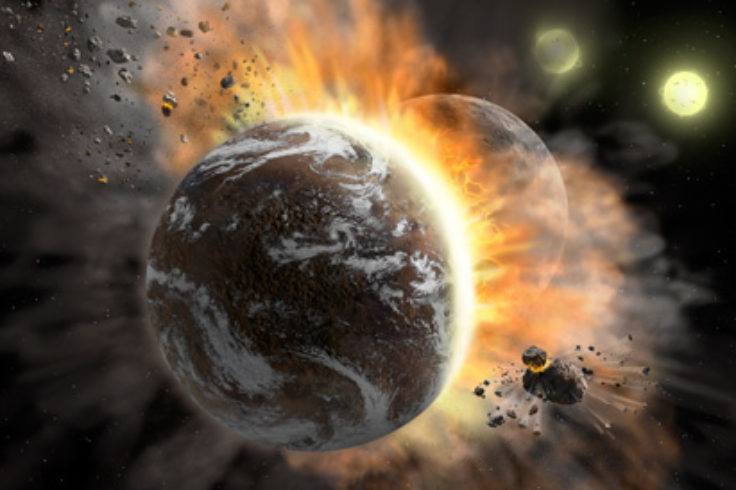 The July 17–18 Occultation of Antares