A KBO in the Crosshairs

Consider this: Only 15 years ago, the Kuiper Belt was nothing more than a hypothesized belt of objects beyond the orbit of Pluto. Now more than 1,100 of them are known — and Pluto's one of them! 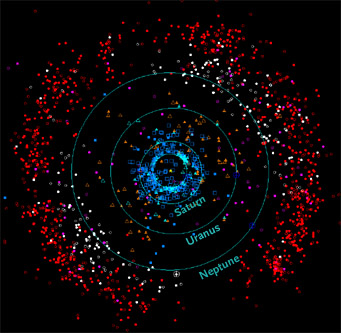 Red and white symbols denote the location of known Kuiper Belt objects (KBOs) as of February 2010. Click here for a larger view.

Yet our newfound familiarity with Kuiper Belt objects (KBOs) is a mile wide and an inch deep — or a kilometer wide and a millimeter deep (take your pick). Because they're scores of astronomical units away, what we know about even basic properties of KBOs, such as diameter and surface reflectivity, is often guesswork.

So here's the story about how an international team of astronomers mounted a major campaign to learn about one of these objects, and how being in the right place at the right time — twice — paid big dividends.

Some background about our protagonist: The KBO designated 55636 (it doesn't have a name yet) was discovered in 2002. Most everything we know about it involves orbital motion. It takes 283 years to complete one revolution along a modestly elongated, highly inclined orbit that averages 4 billion miles (6½ billion km) from the Sun. Given its 20th-magnitude appearance and guessing its surface to be dark, astronomers initially assumed that it's roughly 600 miles (1,000 km) across.

A year ago, the Amateur Telescope Makers of Boston invited noted MIT planetary scientist James Elliot to speak at the club's monthly meeting. Elliot is no stranger to amateur involvement: you'll often find him teaching his astronomy students the ropes at MIT's Wallace Observatory, less than a mile from ATMoB's always-busy clubhouse. 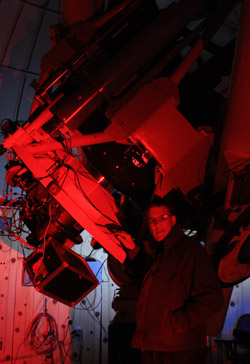 Boston-area amateur Bruce Berger poses with the 1.5-m telescope at the observatory on Sierra San Pedro MÃ¡rtir in northern Baja California, Mexico, where he attempted to observe the occultation by KBO 55636 with staff astronomer Raul Michel.

During his presentation Elliot described an upcoming occultation, during which 55636 would briefly pass in front of a nondescript 13.2-magnitude field star. If observed successfully, it'd be the first-ever witnessed occultation of a Kuiper-Belt Object (aside from Pluto and, separately, its moon Charon).

However, Elliot continued, given uncertainties in the two objects' positions and the KBO's diameter, that the "shadow" of 55636 might fall anywhere on the hemisphere of Earth facing its direction. To make sure the occultation was seen, somewhere, he'd need to set up a widespread network of observing stations — and to do that he'd need help. "Anyone interested?" he asked the audience?

"Right place, right time" #1: ATMoB members Bruce Berger, John Briggs, Gary Jacobson, Paul Valleli, and Bernie Volz were in the audience and answered the call. All are seasoned observers, but even so occultation work is demanding. Usually, these blink-outs last only several seconds. So after a couple months of training, Elliot and MIT colleague Michael Person dispatched them to their assigned stations for the event: Berger, Jacobson, and Volz flew to a pair of sites in Mexico; Valelli to Behlen Observatory in Nebraska; and Briggs to northeastern Australia.

By the time KBO 55636's occultation took place last October 9th (at 10:30 Universal Time), Elliot had strung together 21 telescopes at 18 stations that created a 3,700-mile-wide "fence" of observers around the Pacific rim. Altogether, notes Person, the effort utilized 10 amateurs, in addition to several students. 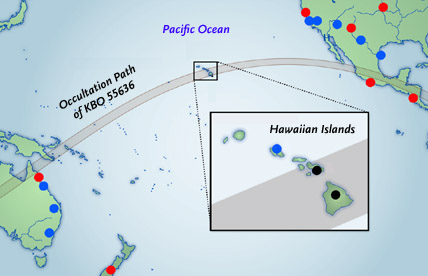 The October 2009 occultation of a faint star by Kuiper Belt object 55636 created a narrow track across the Pacific ocean that passed over the islands of Hawaii and Maui. Black dots denote the two observing stations that recorded an occultation, blue dots those that saw no occultation, and red dots those that were clouded out.

As expected, most everyone — including all the ATMoB volunteers — were either clouded out or saw no event. However, two stations in Hawaii got lucky. Wayne Rosing, using the 2-m Faulkes Telescope on the summit of Maui's Haleakala, recorded an unambiguous 8-second outage. Taken alone, the Faulkes observation meant that KBO 55636 had to be at least 125 miles (200 km) across, but it wouldn't have pinned down the diameter. A second chord from another station was needed.

Meanwhile, Steven Souza (Williams College) and University of Hawaii undergrad Nathan Secrest had set up near the Onizuka visitor center on Mauna Kea. Their gear was considerably more modest: a 14-inch Celestron telescope on an equatorial mount and an occultation-optimized camera system called POETS that Souza had supplied.

But during a practice run the night before, somehow Souza tore the rotator cuff in his right shoulder. Bad news! On the Big Island's Big Night he'd be coping with "the kind of pain that makes you cry" in his hotel room. Suddenly forced to observe the event solo, Secrest switched to an SBIG camera he'd used before. It wasn't as capable as the POETS setup — it could only take a 5-second-long image every 12 seconds — but it'd have to do.

"Right place, right time" #2: Miraculously, not only did Secrest get two frames that clearly show a dip in the star's light, but luckily (very luckily) those two frames happen to fall during the occultation's beginning and end.

(You might wonder why only two of the many scopes atop Haleakala and Mauna Kea were watching this important event. Most of them had slewed over to the Moon, readying to watch the impact of the LCROSS spacecraft less than an hour after the occultation.) 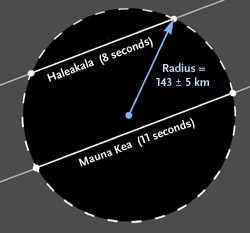 The two confirmed dimmings caused by KBO 55636 represent chords across the object's invisible disk that uniquely determine its radius (presuming it has a spherical cross-section).

When combined with the Faulkes record, Elliot and his team conclude that KBO 55636 must have a diameter of about 177 miles (286 km). Not only is this far smaller than astronomers had assumed, it means that the surface must be very bright — at least 80% reflective — to be seen at magnitude 20.

"This is a surprising result," notes occultation specialist Bruno Sicardy (Paris Observatory). There's no good explanation for what makes this object so bright. It seems to be part of a "family" of KBOs, including much larger 136108 Haumea, created during a collision roughly a billion years ago. But in that case long-term exposure to space radiation should have made all their surfaces dark, not bright. Maybe 55636 has recently been recoated by a fresh coat of ice or resurfaced by slushy oozings from its interior, but the small diameter argues against these explanations. The implication, Sicardy concludes, is that astronomers' thinking about space weathering or the the Kuiper Belt's evolution — or both — might need significant revision.

Kudos to Elliot for involving amateurs in this history-making occultation. The team's results appear in the June 17th issue of Nature, and you'll find Secrest and the ATMoB volunteers among the coauthors. (Be sure to check out Berger's blog of his adventures in Mexico.)

It's just one more example of how professional and amateur astronomers have increasingly joined forces to do great science.

It is important to mention that some Kuiper Belt Objects are also planets. Any that are large enough to be rounded by their own gravity, a state known as hydrostatic equilibrium, are planets as well as KBOs. One does not preclude the other.

Dear mr. Beatty (if you should ever read this),

I find myself shrugging slightly at the conclusions of the article. Who says that KBO 55636 is spherical? You must agree that if this object has an elliptical shape, and both observations have only seen the one side of the ellipse, it might be twice (or even more...) the size, hence the high albedo is not so strange! (I suspect an object of this size is not rounded by its own gravitational pull.)

Following this, I have no idea why the complete idea about space weathering should be revisited because of two observations....! The form of the object is not known.

I would find it very nice of you if you want to answer this, so I can boast about it to my friends. 😉

This is an interesting story, but I'm puzzled about one thing. How is it known that the two images secured by Nathan Secrest occurred exactly at the occultation's beginning and end? Was the star only partially occulted both times? That doesn't seem possible for 5-second exposures taken 12 seconds apart during an 11-second occultation.