We're in the midst of the 40th anniversaries of the six Apollo landings; the last, Apollo 17's, comes in late 2012. It's hard to imagine that we might still be making fundamental discoveries about the Moon from the study of the dusty rocks hauled back to Earth all those years ago, but consider the following. 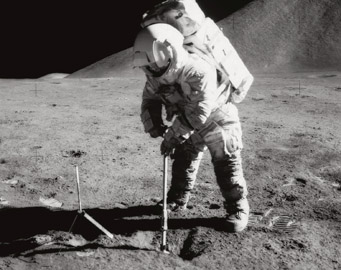 Astronaut Jim Irwin uses a scoop in the lunar soil during the Apollo 15 mission in mid-1971. Mount Hadley rises 14,800 feet (about 4,500 m) above the plain in the background.

In the past weeks, two new analyses of Apollo samples have appeared in competing but equally prestigious journals. The articles themselves were competing too: one claims that at least some of the lunar interior contains as much water as do the lavas now oozing out along Earth's mid-ocean ridges, while the other asserts that on the whole the Moon must be very, very, very dry. It's too early to know who's right — perhaps both are — but here's why the eventual correct answer has major implications for solar-system history and the Moon's formation in particular.

Most planetary scientists now accept that a Mars-size object whacked the just-formed Earth so hard that much of our young planet's mantle, and most of the impactor, spurted into orbit as white-hot rock vapor that eventually condensed and collected into that big, beautiful, solitary satellite of ours. The Moon ended up both very much different from Earth (it's nearly iron-free, for example) yet very much like it (the two bodies' ratios of oxygen and chromium isotopes are identical).

Frankly, geophysicists still wrestle with how conjure up a Moon made in part from Earth materials and yet have its rocks — as the Apollo samples initially showed — utterly devoid of water in any form. There are ways to make this stark chemistry work out: for example, Earth might have started out completely dry as well, and then amassed its water later after being hit by countless comets and water-rich asteroids. But the geochemical recipe would be a lot easier to follow if we knew, with certainty, just how much water ended up in the Moon. 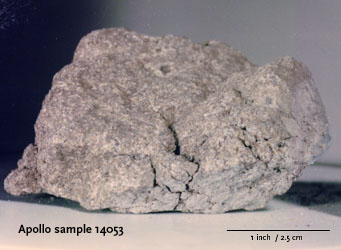 Apollo 14 astronauts collected this volcanic rock, a basalt, roughly 0.8 mile (1.2 km) from the lunar module Kitty Hawk during their 33½-hour stay on the Moon's Fra Mauro region in 1971.

So is the lunar interior wet or dry? On the "wet" side of this debate are a few research teams who've found water in volcanic glasses and in a mineral called apatite. The chemical formula for apatite is Ca5(PO4)3(F,Cl,OH). It looks messy — and it is. Apaptite is a "dreg" in the rock-forming process, a mineral that sops up leftovers that none of the other rock minerals wanted. Water, in the form of hydroxyl (OH), is one of those leftovers. 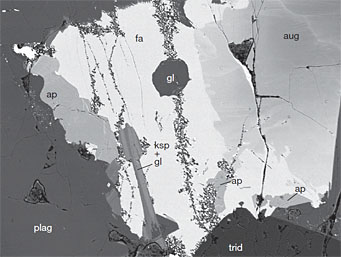 Using a sensitive ion mass spectrometer, they found abundant hydrogen (derived from hydroxyl), chlorine, and sulfur — enough of it, in fact, to be "essentially indistinguishable" from apatite crystals found in rocks derived from Earth's upper mantle.

So might portions of the lunar mantle or crust are more volatile rich than previously thought? If so, geophysicists could take a slightly more relaxed approach to formulating a Moon from the primordial smash-up's debris.

However, a counterpoint favoring a bone-dry Moon appeared just two weeks later, in August 5th's edition of Science Express. A team led by Zachary Sharp (University of New Mexico) argues that the Moon is exceeding dry, using roundabout evidence from the abundance of chlorine's two isotopes.

Sharp hadn't gone looking for this result. He and others had studied the ratio of chlorine-35 and slightly heavier chlorine-37 in wide range of planetary samples. They'd found a consistent story: the two isotopes were always about equal in Earth rocks and nearly so in meteorites, with very consistent results that never varied by more than 0.5%.

But when they assayed the chlorine in lunar rocks, the numbers were all over the place — a range of ratios "so ridiculously large," Sharp recalls, that he thought their measurement technique was seriously flawed. However, it wasn't. In particular, the lunar rocks they studied contain up to 25 times more chlorine-37 than chlorine-35. "The only way to get this high range of Cl isotopes," Sharp explains, "is if in the Moon is anhydrous," that is, water-free.

Here's his thinking: In a bubbling pot of magma on Earth, the lighter chlorine isotope would boil off more readily. But that's neatly balanced out by the strong preference of chlorine-37 to bond with hydrogen to create HCl, which also boils away readily. In this isotopic match-up, the result is a draw.

However, remove hydrogen (a.k.a. water) from the mix, and the chlorine-37 has no way to escape. It's forced into end-of-the-line minerals like apatite, salts, and metal chlorides, but the chlorine-35 flies off into space. The result would be compositions strongly biased toward the heavier chlorine isotope — just what Sharp's team found.

Might some other process be skewing the ratio? The researchers looked at all the possible candidates, including eons of exposure to the solar wind, but in the end the "dry-Moon" seems the only plausible cause.

This facinating scientific tug-of-war is still in the early going. Remember: we have well-selected samples from only nine locations on the Moon (if you include the three small staches returned by the Soviet Union's Luna landers). How would you like the job of deciding how Earth formed if you could pick rock samples from only nine spots on our vast planet? It wouldn't be easy.

Not much different to the climate change (global warming) debate, where we have distinguished scientists on both sides of the argument there also.
Nowadays, as opposed to yesteryear, we have computers and computer modeling and, in my opinion, this so-called 'modeling' often gives conflicting results anyway - depending upon who the scientist is and on his/her particular persuasion on the subject in hand.
I realise the research discussed in the article was largely 'practical' and not necessarily 'computer modeling', but I do regard such modeling as a worry... So, long live debate, as long as humankind isn't blamed for everything.

How foolish is the following claim?

âone (Boyce in the journal, Nature) claims that at least some of the lunar interior contains as much water as do the lavas now oozing out along Earth's mid-ocean ridges.â

How can it be possible to truthfully claim any significant knowledge about the water content of the Lunar interior which has yet to be directly observed, with the water content of molten rock pouring out onto the ocean floor â which is an environment that is completely flooded with high pressure sea water anyway?

This wonderful wisdom sounds similar in tone to the silly climate-gate extrapolations. I am really quite tired of so-called experts who make extended extrapolations with many technical details about stuff they clearly know next to nothing about!

They keep theorizing about how water-rich the extremely dry Moon, Asteroids and Mars are. But a global flood on our Earth which has still retains enough water to cover it entirely by over a mile deep - assuming a smooth surface before plate tectonics pushed the mountains up - is rejected out of hand.

Nothing like a good discussion about subjects that no one can really observe and prove in reality.

I agree with the above poster,Richard. I believe science in America is under attack. This is one example:

Excerpt: "The Discovery Institute is a conservative non-profit public policy think tank based in Seattle, Washington."

In 2005, a federal court ruled that the Discovery Institute pursues "demonstrably religious, cultural, and legal missions",and the institute's manifesto, the Wedge strategy, describes a religious goal: to "reverse the stifling dominance of the materialist worldview, and to replace it with a science consonant with Christian and theistic convictions".

Further: " Its goal is to "renew" American culture by shaping public policy to reflect conservative Christian, namely evangelical Protestant, values. The wedge metaphor is attributed to Phillip E. Johnson and depicts a metal wedge splitting a log to represent an aggressive public relations program to create an opening for the supernatural in the publicâs understanding of science."

There are others at work besides this group. Carl Sagan had good reason to worry when he wrote 'The Demon Haunted World" - Science a candle in the dark. The dark-agers are here - now.