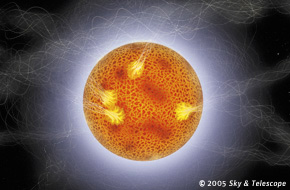 This illustration suggests how a magnetar might appear if you could view it up close (from behind massive shelding!) with eyes that see X-rays instead of light. Magnetars are neutron stars with magnetic fields much more powerful than even the neutron-star norm. The field can be so powerful that it cracks the star's superstrong solid crust. Energy released by the cracking shows up as a brief, intense flash of X- and gamma rays.

"There’s a lot of strange stuff in outer space," begins a recent NASA news release, "but of all the bizarre objects out there, one of the weirdest would be a neutron star."

The news in question was that a run-of the-mill pulsar (spinning neutron star) suddenly started violently bursting and hiccuping at X-ray and gamma-ray wavelengths, revealing itself to be a "magnetar" in disguise. The news release was written by former S&T senior editor Bob Naeye, now working at the NASA/Goddard Space Flight Center, and it's such a nice popular exposition of a brain-boggling subject that I'll post the whole thing:

[Neutron stars, superdense objects like giant atomic nuclei,] form when the core of a huge star stops producing energy. Gravity collapses the core to form the neutron star. The rest of the star blows up in a stupendously powerful explosion called a supernova.

Neutron stars are made of stuff unllike anything on Earth. These objects pack about one to two Suns worth of material into a ball no larger than New York City. A few cups of neutron star stuff would outweigh Mount Everest.

Until now, pulsars and magnetars seemed to form two separate classes. A neutron star was either a pulsar or a magnetar, but not both. But using NASA’s Rossi X-ray Timing Explorer (RXTE), astronomers have found a neutron star that seems to share characteristics of both types. 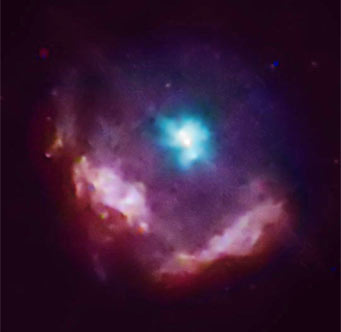 The young supernova remnant Kes 75 is full of detail in this X-ray image from the orbiting Chandra X-ray Observatory. The pulsar is in the center of the blue area at the top. Short-wavelength X-rays are shown as blue, longer-wavelength X-rays as red.

This neutron star is known as PSR J1846-0258. “PSR” is short for “pulsar,” and the numbers stand for its sky location in the constellation Aquila. It lies in a young supernova remnant named Kes 75. For years, PSR J1846 seemed like an ordinary pulsar, beeping three times per second as it spins on its axis.

But a team of Canadian and American astronomers led by Fotis Gavriil of NASA’s Goddard Space Flight Center in Greenbelt, Md., decided to take a closer look. They realized that RXTE observed this pulsar in 2006, but nobody had looked at the observations in detail. When Gavriil and his colleagues studied these observations, they realized that PSR J1846 gave off five huge outbursts of energy. Four of these bursts occurred on May 31, 2006, and the other on July 27, 2006. Each of these flares lasted less than one second, yet during these moments they unleashed the energy of tens of thousands of Suns!

Ordinary pulsars have never been seen to produce such violent bursts of energy. But magnetars generate them frequently. "We are watching one type of neutron star literally change into another right before our very eyes. This is a long-sought missing link between different types of pulsars," says Gavriil.

"Young, fast-spinning pulsars were not thought to have enough magnetic energy to generate such powerful bursts," says team member Marjorie Gonzalez, who is now based at the University of British Columbia in Vancouver, Canada. "Here’s a normal pulsar that’s acting like a magnetar."

Astronomers know that PSR J1846 is very young. It is no more than 884 years old, which is very young compared to most objects in the universe. Maybe magnetars are just a phase of a young neutron star’s life cycle. In other words, maybe a neutron star starts off as a magnetar, but doesn’t start producing outbursts until it's several hundred years old. It acts like a magnetar for perhaps a few thousand years, and then settles down and becomes a pulsar.

The statement, "Young, fast-spinning pulsars were not thought to have enough magnetic energy to generate such powerful bursts," indicates a lack of understanding of the energy generated by repulsive interactions between neutrons (N).

N-N repulsion has been documented as one of the major factors in the rest masses of all 2,850 known types of stable and radioactive nuclei [1, 2].

This signals the end to speculation that a Big Bang created Hydrogen, to the standard model of Hydrogen-filled stars, and to the illusion that the universe is powered by Hydrogen-fusion.

The same template was followed for stars and atoms, as Niels Bohr suggested in his model of the atom before quantum mechanics was invented.

Hydrogen fills inter-stellar space (as electrons fill inter-nuclear space), but the mass of the universe (like the mass of the atom) consists almost entirely of energetic, compact nuclear matter. Oliver K. Manuel;
http://myprofile.cos.com/manuelo09

If someone in the world knows anything better on neutron-repulsion – This is the best scientist of the world – Prof. Oliver Manuel. He is founder new field of science – Neutron-repulsion science.
We have an excellent framework for the scientific community to solve deep crisis in the Cosmology.
http://www.neutronrepulsion.ge/framework.html
False epoch of the BBT is over!
There is begun new epoch of the cyclic and recycling universe and the Neutron Cosmology!
Each young star is a neutron star system.
Each old star is a recycled neutron star system.
Each neutron is a fuel in the stellar cores.
The naked cores of the exploded stars indicate remaining protons and neutrons (99.999999%) but these neutrons are not the ordinary neutrons. They are the recycled neutrons without the positrons and electrons.
Each scientist wants to know – how the Milky Way and other galaxies are formed.
Please – Only the neutron repulsion science has an amazing answer and the answer is the truth!
http://www.neutronrepulsion.ge/Universe.html