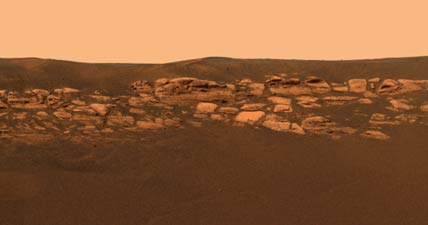 The red arid terrain seen at the Opportunity landing site appears to have once been a locale capable of sustaining life.

When the two Mars Exploration Rover missions were first envisioned, their mission was clear: find if and where water once persisted on Mars. To do this, Spirit landed in a putative ancient Martian lake; Opportunity landed on a plain known to contain crystalline hematite — a mineralogical sign suggesting water. Today NASA scientists announced that Opportunity's mission is a success. The rocks below its wheels were once "soaked with liquid water," said Steven W. Squyres (Cornell University). Moreover, the now-desiccated terrain was once a location that could have supported life. "This was once a habitable environment for some amount of time," Squyres said.

Four pieces of evidence led the scientists to their conclusion: