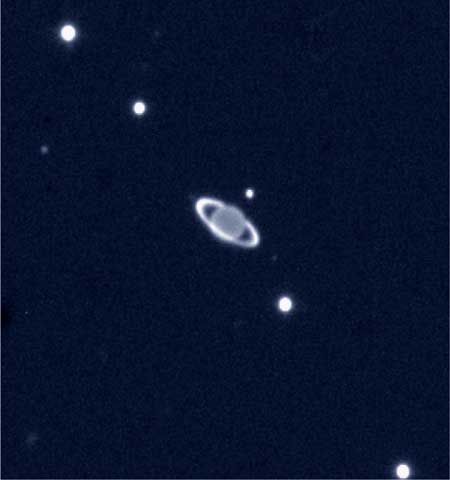 Uranus and seven of its moons are imaged by the Antu unit of the European Southern Observatory's Very Large Telescope in Chile.

It's not often that an image gets astronomers around the globe doing double takes. At first glance this view from the European Southern Observatory (ESO) looks like a decent amateur photo of Saturn. In fact this ringed gem is actually Uranus. One of the 8.2-meter reflectors making up the Very Large Telescope at the ESO Paranal Observatory in Chile captured this intriguing image in a 5-minute near-infrared exposure.

Although William Herschel discovered Uranus in 1781, its rings weren't detected until 1977 when teams of astronomers watched Uranus pass in front of a star. The star blinked on and off several times before the disk of the planet passed in front of it. At the time the observers deduced that the ice giant has at least nine rings. Voyager 2 photographed two more in 1986 when the southern pole was oriented toward Earth. Now, 16 years later, the rings are at an angle where they are again easy to see.

Seven of the planet's moons can be identified in this image. The brightest five are, from top left to bottom right: Titania, Umbriel, Miranda, Ariel, and Oberon. Two faint moons discovered by Voyager 2, Portia (at upper left edge of ring) and Puck (lower right of ring) are also visible. Uranus has 21 moons in all.