Astronomers have found a system of six super-Earths, one of which is at the "Goldilocks" distance for sustaining liquid water. The Sun-like host of the system lies only 40 light-years away.

“Are we alone?” To answer the biggest question of our time, first we have to start with the smaller ones: Can we find exoplanets that look like Earth? And when we find them, will they harbor the conditions for life?

Astronomers began detecting planets around other stars in 1989, with the latest exoplanet tally at 846. Most of the initial finds were Jupiter-mass or greater, but in recent years, new instruments, such as the High Accuracy Radial Velocity Planet Searcher (HARPS), have been designed to detect the signature of smaller planets. With that, astronomers are zeroing in on their prime target: a Sun-like star harboring an Earth-like planet in its habitable zone. At this “Goldilocks” distance, the planet is not too hot, not too cold, but has just the right temperature to harbor liquid water on its surface. 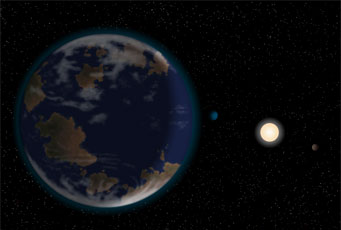 An artist imagines what the newly discovered super-Earth around the star HD 40307 looks like. While the planet's appearance is speculative, the distance between the two is accurately portrayed.

Now, astronomers have discovered one of the most promising candidates for an Earth-like twin. An international team led by Mikko Tuomi (University of Hertfordshire, England) and Guillem Anglada-Escudé (University of Göttingen, Germany) will publish the study in Astronomy & Astrophysics, claiming the detection of three additional planets around the dwarf star HD 40307, which lies just 40 light-years away.

In 2009, the HARPS team announced the existence of three super-Earths orbiting HD 40307. The planets each tugged on the star as they zipped around, producing a tell-tale wobble in the stellar spectrum. All three circled the star in tight orbits, well within a Mercury-like orbit, leaving them far too hot to sustain liquid water.

Tuomi and Anglada-Escudé re-analyzed the same publicly available data using a new technique, revealing three additional super-Earths around the same star. The team pioneered the technique to boost the sensitivity to smaller planets. They also avoided false signals induced by the star’s own activity by using only the reddest parts of the star’s spectrum.

The sixth, most distant planet HD 40307g is garnering the most interest. With a mass at least 7 times that of Earth, the planet could be rocky. And with a period 200 days long, the planet receives roughly 62% of the radiation the Earth receives from the Sun, putting it squarely in the habitable zone. If the planet is rocky — and that’s a big if — it could sport liquid water on its surface.

For those keeping track, HD 40307g isn’t the first planet to be detected in a star’s habitable zone. But most discoveries so far have had important caveats attached: some, such as 55 Cancri f, are as massive as Jupiter. Others, such as GJ581 and GJ667C, lie so close that their orbits become tidally locked — when one side of the planet always faces the star, the prospects for life become less likely. The most promising candidate to date has been Kepler-22b, but though this planet qualifies as a super-Earth in a habitable zone, it's unlikely to have a rocky composition.

One advantage HD 40307g has over other super-Earth competition is its long orbit. Since it’s farther away from its host star, its orbit is not tidally locked, so the day-night rotation could be similar to that of Earth. Another bonus point to life is the exoplanet’s host star: just like the Sun, it’s 4.5 billion years old, it’s similar in size, and it’s not magnetically active.

“The star HD 40307 is a perfectly quiet old dwarf star, so there is no reason why such a planet could not sustain an Earth-like climate,” Anglada-Escudé explains.

Additional observations are needed to confirm that the candidate is indeed an exoplanet. The authors caution that ground-based telescopes won’t be able to decipher much more in the way of details, such as the planet’s radius. The planet’s orbit probably doesn’t cross the star from our point of view, so transit observations such as those conducted by Kepler are impossible.

Instead, the authors suggest that the planet — separated from its host star by 40 milli-arcseconds — could make a good observing target for future telescopes designed to image exoplanets directly. (However, funding for such telescopes is currently nonexistent.)

While the search for Earth's twin continues, HD 40307g takes astronomers a little closer to their target.

This is an interesting exoplanet report. I plan to follow details about this exoplanet as they are released. My initial observations:

The 62% sunlight energy window looks similar to the Faint Young Sun problem and the rotation is not presently known. The exoplanet could also rotate as slowly as Venus does too, we do not know at this time the details of this super-earth exoplanet.

Just think, if there are sentient living beings on HD 40307g, and they're able to receive and decode our electromagnetic transmissions, they might be breathing a sigh of relief that the leaders of the two most powerful nation-states on that interesting exo-planet just narrowly averted a thermonuclear war that could have ended transmissions of the Ed Sullivan show.

I wouldn’t get too excited about intelligent life on HD 40307g just yet ya’ll. Even if it has the right temperature, chemistry and water content, with its mass of AT LEAST 7 earths, large land life-forms would be hard pressed (literally) to make a go of it. However, if this planet happened to have a scaled up version of our moon …

We discussed this planet in a German astronomy blog, and the host (an ex-professional) advised that the error margin alone would also allow a planet of 10 Earth masses (minimum mass). Even with 7 Earth minimum masses, which is actually the real mass times the sine of the orbital inclination, the expected value for the actual mass (for random inclinations) is around 11 Earth masses. Uranus has 14 Earth masses and is not very Earth-like. It is therefore not unlikely, that the planet has a huge, dense atmosphere with an opaque cloud deck, just as the gas giants within our solar system. I would wait until a less-than-2-Earth-masses-planet is found before calling it Earth-like.

The real significance of the planet is that this system harbours 6 planets and that their orbits must be very circular to be stable, as close as they are to their host star (the newly detected one is the outermost of the six). This has implications on the formation of planetary systems like our own. This point, unfortunately, didn't make it into the media articles.

Those are good comments. Frank R., I knew that mass to surface gravity wasn’t a directly 1 to 1 ratio, but I hadn’t realized that the surface gravity goes up as slowly as your post shows. Your comment indicates some of these “super Earths” may not be as inhospitable as one may at first think, but I’d still hate to have my weight doubled! Dieter’s observation of the planet’s real mass likely being around 11 earths is valid too, and as to his point about atmospheres is very well taken. Just think, the most Earth-like planet that we know of is still Venus, and its atmosphere is horrible. I wonder about Dieter’s idea that HD 40307g must have a circular orbit however, because the Exoplanet app shows an eccentricity of 0.29 for this planet. On the other hand I’m wondering about the accuracy of this app, because it shows this planet as being on the inner, hot edge of HD 40307’s habitable zone, whereas John Bochanski’s above article reports that, “the planet receives roughly 62% of the radiation the Earth receives from the Sun, putting it squarely in the habitable zone.” If the Earth received only 62% of present solar insolation, would even it still be habitable? Can anyone clarify these questions?

It's fun to imagine larger variants of organisms we know on our planet living on such a huge orb in the sky. Hominids 3 meters tall, sparrows the size of a turkey and the like. Why not? Evolution may be scalable. Just as Earthling species in extreme conditions thrive why can't inhabitants of a different planet just grow that way?