A Night of Service

Even before taking office as the 44th president of the United States, Barack Obama called on Americans to make an ongoing commitment to community service. With that in mind, last Tuesday evening, January 13th, we conducted our first "National Day of Service" event. Just one week before the inauguration, a group of students and their parents, teachers, and amateur astronomers gathered at the Corona Foothills Middle School in Tucson, Arizona, for a community star party. While it wasn't the first event listed on the USA Service website, it was undoubtedly the first one to leave Earth and head to the cosmos. 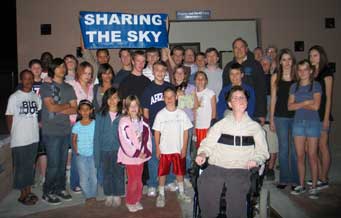 The star party, sponsored by the National Sharing the Sky Foundation, was very successful. Although we've held similar events each month for the past year and a half, there was something magical in the air this time. For two hours we toured objects in the night sky. There was dazzlingly bright Venus in the west, the distant Andromeda Galaxy high overhead, and the Crab Nebula in the east.

These star parties are part of a slow process to inspire people, particularly youngsters, to become interested in the night sky. It's a big challenge even in this International Year of Astronomy, which is tailor-made for such efforts.

I find it interesting to note how the journey to learn about the night sky courses through individual families. At an earlier event there was an occasion when a child was looking through the telescope, listening carefully as I introduced her to the wonder of Jupiter's Galilean satellites. Then her parent, who was standing in line but apparently not listening, took a cursory look in the eyepiece and asked, "What are those dots next to the Moon?"

My first reaction was one of disillusionment; how can we inspire young people when their parents appear so uninterested? But, with time, answers begin to emerge. By encouraging the entire family to keep looking through the telescopes, both parents and children begin to grasp the ethereal beauty of what they are seeing. Jupiter's "dots" became moons, worlds in themselves, and the planet's shape, flattened because of its fast 10-hour rotation period, became more distinct, bearing no relation to the real Moon (which, by the way, wasn't even in the sky on that particular night).

Last Tuesday, after looking at Venus, we were able to venture well beyond our cosmic neighborhood to an object not a few million miles away but more than 2 million light-years away. In addition to looking at the Andromeda Galaxy and its 400 billion suns filling the eyepiece, we also imagined it in terms of philosophy. Some 3 billion years from now the Andromeda Galaxy and the Milky Way will probably begin colliding, eventually resulting in the evolution of a giant elliptical galaxy. It gave our group pause to wonder at the amazing sights they were eating up.

Our final view of the evening was a journey more through time than space. The Crab Nebula is the remnant of a great supernova explosion that was seen in AD 1054. But there's more left than just the bright cloud of dust and gas we were looking at. The cloud is home to a rapidly spinning pulsar that emits a powerful radio signal. You can hear its call on the Web.

In this time of renewal, we think that one good community-service project is to help people become inspired by the beauty of the night sky. Last week, in a small way, we did that. As this pivotal year continues, we're determined to give as many people as possible a reason to look up.

Kudos to David and Wendee Levy for their continuing efforts to inspire young people to reach for the stars. One of those middle school students may be sparked by an event like this star party to further an interest in science or astronomy. The Levy's set a good example for us all to make an effort to share our love for the night sky and the wonders of the universe with others during this International Year of Astronomy.

My congratulations to David and Wendee for their effort. I'm sure that everyone who is involved in trying to get the people to look at the sky have heard some dissapointing things like David have heard. But despite the task is sometime overwhelming, this year would be the better opportunity we sky lovers have to share this with all kind of people.
David was once here in my country to dedicate our observatory, and one thing I'm proud to tell you David is that the words you said that night have been our mission for all these year, and more young eyes are arriving to see through the eyepieces of our telescopes...and we hope in this year the number will be larger. Clear skies for you!