A stunning image from the Hubble Space Telescope and Chandra X-ray Observatory reveals a planetary nebula come back to life. 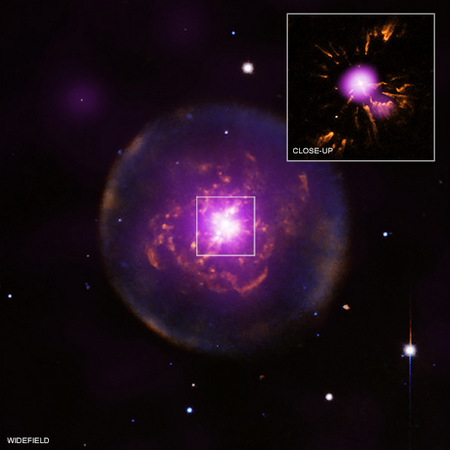 The star at Abell 30's center puffed out its outer layers into a planetary nebula 12,500 years ago. 850 years ago, the star choked out additional knots of helium and carbon-rich gas, creating a second planetary nebula inside the first. The wide-field view is 5.6 light-years across; the inset is 1 light-year across. The composite image glow in optical and X-ray light. Optical data shows emission from oxygen (orange) and hydrogen (green and blue); X-ray emission is colored purple.

This stunning image reveals the death throes of a star not unlike the Sun. The planetary nebula Abell 30 lies 5,500 light-years away, and its central star, less than eight times the mass of the Sun, is nearing the end of its life. But not before it has its final say. 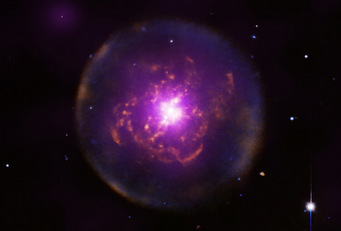 Once the dying star had puffed away its outer layers, the stellar cinder blasted the gas with intense radiation and fast-moving particles, setting it alight.

Planetary nebulae are the often-beautiful (and sometimes mysterious) shells of gas ejected from a dying, low-mass star. Sun-like stars live long, steady lives as they burn through the hydrogen in their core. As the core runs out, the star — including our future Sun — continues fusing hydrogen in a thin shell surrounding the depleted center. The star puffs up to become a red giant, denying the inevitable with a roughly hundredfold increase in size and thousandfold increase in core temperature. (The heated core can’t account for the increase in size, so the stars’ visible surface cools, turning orange in color.)

Unavoidably, the shell of hydrogen runs out as well, and the core contracts once more while the star’s outer layers puff out in a slow-motion explosion. The gas shell glides outward, in the case of Abell 30 moving less than 100,000 miles per hour. The gasping core remains, no longer a red giant, but a hot cinder. Its ultraviolet radiation and fast stellar wind, flying outward at 6 million miles per hour, slams into the slower moving gas, setting it alight in what astronomers see as a planetary nebula. 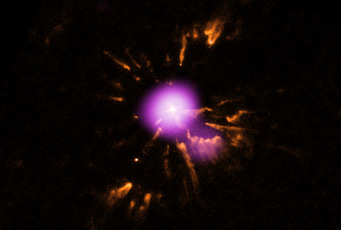 When the dying star at the center of Abell 30 reverted briefly to a red giant phase, it coughed out a new layer of gas, lighting a second planetary nebula inside the first.

That’s what happened 12,500 years ago in Abell 30 to create the outer spherical shell seen in the wide-field image. But 850 years ago, the dying star decided it hadn’t yet said its piece. It reverted briefly to a red giant phase, long enough to choke out knots of helium and carbon-rich gas. A second, small-scale planetary nebula formed inside the first. Martín A. Guerrero (IAA-CSIC, Spain) and his colleagues investigated this second phase by zooming in on Abell 30’s heart, in a view about one light-year across, using the Chandra and XMM-Newton X-ray observatories. In their observations, Guerrero’s team found that as the fast stellar wind rams into the knots, they heat up and erode to produce the X-ray emission.

This type of stellar “rebirth” is rarely seen — only three other examples are known. The exceptional resolution of Hubble and Chandra combine to give astronomers an exquisite view of an atypical event.

While the beautiful structures created by the dying star earn most of the attention in this stunning composite image, the X-ray emission from the star itself may be the real mystery. Guerrero’s team was unable to explain the dying star’s X-ray glow, ruling out some theories and declaring others implausible. The authors describe even the best theory, a hot bubble of gas created during the star’s second explosion, as “puzzling” and “implausible.”

A really interesting article and very well explained -- I could picture it from your description. Keep up the good work 🙂

Afghans Reach for the Stars