In the Kepler-56 system, a red giant star spins on an axis offset by a bizarre 45 degrees from its transiting planets. The discovery of a third companion could explain why.

When you’re having a bad day, just think of Kepler-56. That planetary system has been having a bad few billion years. 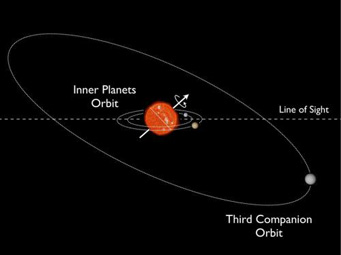 The red giant star Kepler-56 spins on an axis offset by a bizarre 45 degrees from its transiting planets. The discovery of a third companion could explain why.

Kepler-56 is an exhausted red giant star. Having run out of hydrogen in its core, the star now burns the core’s surrounding hydrogen shell to support itself. Meanwhile, it’s parent to two tightly circling planets: the first, a super-Neptune, orbits every 10.5 days; the second, closer to Jupiter’s size, orbits every 21.4 days. And, according to a new study published in today’s Science, the star does it all at a tilt.

How do you deduce the tilt of a star when all you see is a pinprick of light? That’s where the study is pretty ingenious. By looking for minute changes in brightness from the star, Daniel Huber (NASA Ames Research Center) and his colleagues caught wave-like patterns (basically, starquakes) set in motion by the boiling stellar plasma. The patterns look different at a star’s pole than at its equator, so the team was able to pin down the star’s tilt: between 39° and 55° to our line of sight — definitely nowhere near the roughly edge-on inclination of the planets’ orbits.

“It's quite a remarkable discovery,” says Greg Laughlin (University of California, Santa Cruz), an expert in planetary dynamics who was not involved in the study. 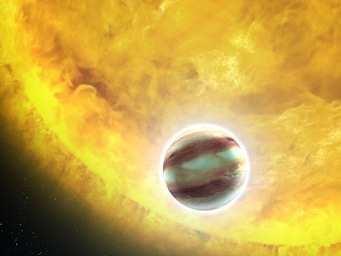 An artist's rendering of a hot Jupiter transiting its parent star.

A tilted star has profound implications for planet formation. Astronomers think that planets form out of the gas-and-dust cocoon that surrounds a newborn star and collapses into a disk around the star’s equator as the star forms. If that’s true, then the planets’ orbits ought to be aligned with the star’s spin. Mis-aligned planets have been found before, but more typically, there's only one hot Jupiter out of whack with the rest of the system. It’s more difficult to explain two planets, especially since they’re both orbiting in the same plane.

And that’s not all. The team followed up Kepler’s observations with a few of their own, using one of the 10-meter Keck telescopes atop Mauna Kea in Hawaii. They were looking for the star’s wobble, expected due to the gravitational tug of its two planets. They found the wobble from the planets, but they also found evidence for a third object. The observations obtained so far don’t cover a full orbit, so all the team can say is that it’s a massive object on a wide orbit — it could be a gas giant orbiting within a few astronomical units (more than 10 times farther out than Kepler-56b and c) or a star within several dozen a.u.

The third companion, whether planet or star, might explain the off-kilter system. If its orbit was tilted with respect to the inner planets’ original orbits then its presence would have shifted them out of alignment with their star over time. The inner planets influence each other’s orbits, so they would have stuck together even as their orbital plane shifted.

Both Laughlin and Huber’s team favor this explanation. But theorists still have plenty of room for play here — the authors offer another five explanations that could also fit the bill, though these alternatives have more difficulty explaining all the details.

Regardless of the source of this system’s chaos, whether it be havoc wreaked by the third companion or something else entirely, the system’s misalignment is the first of its kind discovered for a transiting system with more than one planet, and that fact alone will help theorists hone their models.