The discovery of two tiny moons circling the most famous "dwarf planet" has raised concerns that the New Horizons spacecraft might be endangered when it flies by in July 2015. 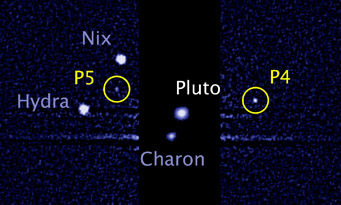 Ordinarily the discovery of a new addition to the Sun's ever-growing family is cause for celebration. That was the case when astronomers used the Hubble Space Telescope to spot a tiny, fourth moon around Pluto in 2011 — and then a fifth one earlier this year.

But Alan Stern (Southwest Research Institute) has a love-hate relationship with "P4" and "P5," as they're known colloquially. Stern is the principal investigator of NASA's New Horizons spacecraft, which will fly past Pluto on July 14, 2015 — 999 days from now.

On one hand, the extra moonlets provide a richer assortment of objects to image and study when the spacecraft arrives. Stern likes to point out that when New Horizons was being assembled, Charon was the only satellite known to orbit Pluto. Now there are five (including Nix and Hydra, found in 2005). "We're getting six objects for the price of two," he notes.

P4 and P5 are known officially as S/2011 (134340) 1 and S/2012 (134340) 1 — following the International Astronomical Union's convoluted designation scheme, in which "134340" is the minor-planet number assigned to Pluto. According to a recent analysis by Marc Buie (also at SWRI) and others, P4 is no more than 25 miles (40 km) across and P5 a little more than half that — so small that New Horizons might overlook them completely unless it's targeted right at them. 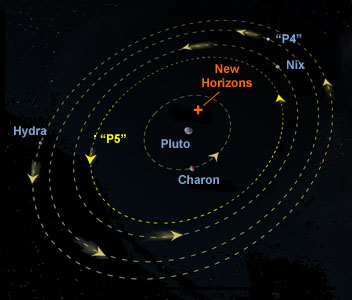 But what concerns Stern is not P4 and P5 themselves, or even other as-yet-unseen moonlets in Pluto's family, but rather what might be happening to them. As he explained during this week's meeting of the the American Astronomical Society's Division for Planetary Sciences, interlopers from the Kuiper Belt should be chipping away at these little bodies, which have too little gravity to clean up their own impact-generated mess. There's a real possibility that extended doughnuts of debris could be cluttering the space inside Charon's orbit — a dangerous gauntlet for the approaching spacecraft.

"I'm a little bit worried," Stern admits. "Even being struck by a BB would be bad at 14 km per second."

The mission team won't know if it's safe to use New Horizon's planned target point, just 6,200 miles (10,000 km) from Pluto, until just a few weeks before the encounter. "We won't have 7 minutes of terror," he says, referring to what the Curiosity flight team endured in August. "We'll have 7 weeks of suspense."

If there's danger ahead, ground controllers will have to redirect the spacecraft onto a new flyby path that's farther away. That go/no-go decision can be made as late as 10 days prior to the encounter. But by then there'll be too little time to develop a revised sequence of imaging and other observations for the craft's seven experiments. So Stern has already started planning one or more alternative pathways that he's dubbed "safe haven bailout trajectories." Nine of these are under consideration, but only the one or two best candidates are likely to be fleshed out over the next two years.

Meanwhile, the teams of astronomers who discovered P4 and P5, which include Stern, will be thinking up names for their little finds. Nothing's been decided yet, but word is that both will be christened well before the flyby.

First, I realize I was lied to in school...for most of my life, including all elementary & secondary school years, Neptune was further from the Sun than Pluto, but I was taught the opposite. Then, Pluto decides to be a dwarf planet and throw off the count entirely. Then this...Pluto dares to have an unknown moon get in the way of an expensive program. How about we fine Pluto for all it's got?!

I did find it kinda funny how the headline implicated Pluto, as if it's Pluto's fault 😉

It is not like the camera on New Horizons can image a BB-sized piece of debris from 10 days away. How are they going to determine if it is safe? The oracle at Delphi says, “The ninth will rise in the night,” which I assume means Pluto’s planetary status must be restored if NASA wants to avoid catastrophe. But how are they going to decide if there is danger ahead scientifically?

@Peter - Just guessing here, but a faint IR glow could indicate dust in a debris ring, and New Horizons does have an IR detector.