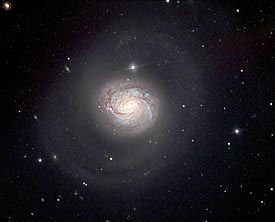 Most astronomers believe that spiral arms are waves that course through a galaxy's disk, containing different stars and gas clouds at different times. But no one knows how long those waves can sustain spiral structure. Kitt Peak Advanced Observing Program participants François and Shelley Pelletier joined Adam Block to make this color-composite image of Cetus's M77.

How long could spacefaring voyagers remain away from their home galaxy before they couldn't recognize it upon returning home? If that galaxy is 8th-magnitude M77 (NGC 1068 in Cetus), the answer is just 100 million years — a cosmological eyeblink. So say Michael R. Merrifield (University of Nottingham, England) and Richard J. Rand and Sharon E. Meidt (University of New Mexico) in a paper that recently was published electronically by Monthly Notices of the Royal Astronomical Society.

Merrifield and his colleagues derived new formulas and applied them to measurements of M77's carbon-monoxide-laced gas clouds (carbon monoxide molecules emit finely tuned radio waves, allowing astronomers to precisely measure the positions and line-of-sight velocities of interstellar matter). Spiral-shaped wave patterns that are just 3,000 light-years (20 arcseconds) from the galaxy's center whirl around the core three times as often as those 6,000 light-years out, says the team — all but guaranteeing that the galaxy's bright inner pinwheel is destined to wind itself up into an amorphous disk. "If this result turns out to apply commonly to other galaxies," the scientists write, "then intergalactic travelers would be well advised not to use the morphology of spiral structure to identify their homes."

Many of the galaxies with bold, high-contrast arms have an “engine” of some kind that seems to sustain their spiral patterns, either a bar (as in the case of NGC 1300 in Eridanus, left) or a companion galaxy orbiting at close range (as in the case of M51 and its satellite galaxy NGC 5195, right).

But some experts are reserving judgment. Bruce G. Elmegreen (IBM Thomas J. Watson Research Center) cautions that the composition of M77's interstellar clouds may differ from place to place, possibly fooling Merrifield and his collaborators into thinking that the innermost parts of the galaxy's spiral pattern will outrace the outer parts after a few laps around the track. And while M77's inferred identity as a quick-change artist doesn't surprise John Kormendy (University of Texas, Austin), he doubts that M77's subtle inner spiral can shed much light on the longevity of simple but bold spirals seen in prominently barred galaxies like NGC 1300 and in closely interacting ones like M51.