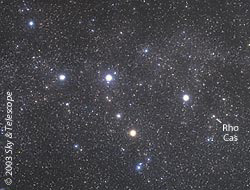 Just off the familiar W shape of the constellation Cassiopeia glimmers 4th-magnitude Rho Cassiopeiae — a yellow-white hypergiant star probably about to undergo a new episode of eruption, fading, and mass ejection.

Keep an eye on Cassiopeia — it contains a naked-eye star that may brighten and dim dramatically in the coming months.

That was the message at a Tuesday press conference at the American Astronomical Society meeting in Seattle. Alex J. R. Lobel and Andrea Dupree (Harvard-Smithsonian Center for Astrophysics) both reported observations of the active hypergiant star Rho Cassiopeiae, which is visible to the naked eye at magnitude 4.5. That it shines so brightly from 10,000 light-years away means that it must be huge. Rho Cas is about as hot as the Sun but roughly a million times more luminous, which makes it is so big that, if it replaced our Sun, its surface would lie beyond the orbit of Mars.

According to Lobel and Dupree, the star has had a chaotic recent past. In 1946 astronomers watched it fade to 6th magnitude and cool from 7,000° to 3,000° Kelvin, changing from spectral type F to M. Astronomers at the time speculated that it had undergone an enormous internal eruption that caused it to swell and cool, but they could not tell much else. The star eventually returned to normal. Then in 2000 astronomers caught Rho Cas acting up again. It brightened by 20 percent (0.2 magnitude), then dimmed by about two magnitudes while again cooling by more than 3,000° K.

This time astronomers were better prepared to study what was going on. The star turned out to be having the largest stellar mass ejection ever recorded. "It ejected 50 Earths per day for 200 days," says Dupree. When the entire event was over, about 5 percent of a solar mass was gone — roughly a thousandth of Rho Cas's mass.

It wouldn't take many such ejections to have life-altering effects on the star. Its behavior may hold the answer to one of astronomy’s lingering questions — why are there no stars more luminous than a million Suns? "Maybe these mass losses constrain the luminosity," suggests Dupree. If all hypergiants have episodic eruptions like Rho Cas, Lobel suggests, it could be why they can't sustain superbright luminosities.

Clearly the star's days are numbered. "Rho Cas is in the very last stages of its evolution," says Dupree. It could go supernova in as little as 50,000 years.

It also seems to have an encore planned. The telltale spectral changes that it showed before its 2000 events have showed up again, only this time they are happening much faster. While Rho Cas isn’t expected to change much in coming days, "We are looking at months rather than years," says Dupree.

Naked-eye and binocular starwatchers can estimate the brightness of Rho (r) Cassiopeiae using the magnitudes given here for several of its neighbors. As of January 9th it was visual magnitude 4.6, according to Janet Mattei of the American Association of Variable Star Observers (AAVSO).

"We have advised amateur groups to continue to monitor it," adds Lobel. "Many national groups are looking, and an observing alert was also issued in Japan to watch." When the star does erupt, Lobel and Dupree plan to alert the amateur community.

"We know this star did an amazing thing," says Dupree. It may be poised to do so again. Keep watch.