A Strange "Comet" Among the Asteroids

January 7th's announcement that the LINEAR telescope had spotted a new periodic comet wasn't all that interesting: a 20th-magnitude blip out in the asteroid belt in a benign orbit that wouldn't come anywhere near Earth. Designated P/2010 A2 (LINEAR) by the IAU's Minor Planet Center, it was just another notch on the finderscope for this discovery machine near Socorro, New Mexico, which has chalked up 77 periodic comets (and a couple hundred one-timers) since coming online in 1998. 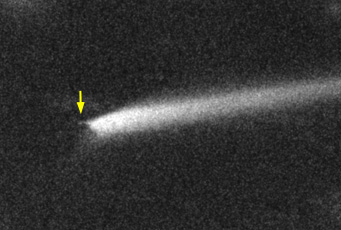 The cometary object P/2010 A2, as captured on January 11, 2010, by the 3.5-m WIYN telescope in Arizona. Note the small distinct object (arrowed). Astronomers are trying to determine if the diffuse cloud is normal cometary outgassing or the result of a collision between two objects. For more detail about this image, click here.

But as other observers chipped in positions over the next week, it became clear that this was an object worth watching. For one thing, the now-precise orbit was looking less like a comet's and more like an asteroid's. And images of the interloper showed a tail growing in length yet without a clearly defined head. The online chatter got more animated — just what was this, anyway?

On January 14th, Javier Licandro and others used the Nordic Optical Telescope in the Canary Islands to get a better view, and they discovered something completely unexpected: a small asteroid lay 2 arcseconds to P/2010 A2's east and was moving along with it. Moreover, the "comet" showed no central condensation and looked more like a narrow dust swarm about 110,000 miles (177,000 km) long. 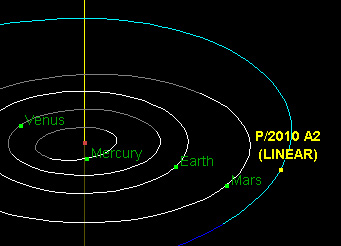 The newfound "comet" designated P/2010 A2 has an orbit that's squarely in the asteroid belt, circling the Sun ever 3.4 years. Click here for a larger view.

Licandro quickly enlisted the biggest aperture in the island's observatory complex: the Gran Telescopio Canarias. Dozens of images taken three days ago using its immense 34-foot (10.4-m) aperture confirm that the "comet" is being shadowed. It's hard not to conclude that we are watching the aftermath of a collision in the asteroid belt. But it's still too early to know for sure. Licandro and his colleagues are analyzing the GTC images carefully — and they hope to make them public soon.

Meanwhile, comet specialists are hoping to observe the strange goings-on with both the Hubble and Spitzer space telescopes. Neither has been given the green light yet, but if/when that happens the observations would be made within the next few days. According to Caltech astronomer William Reach, Spitzer no longer has the ability to look deep in the infrared, but it can still record at 3.6 and 4.5 microns, where the cometary gases carbon monoxide and carbon dioxide have strong emissions.

Could P/2010 A2 be a potential target for the Dawn spacecraft? Their website downplays the prospect of an extended mission, but the chance to examine a new impact site on an asteroid is a rare opportunity (assuming orbital and propulsion parameters permit it).

Back in late October 2007, when Comet Holmes erupted brightly, I immediately suspected an impact on the icy comet nucleus had liberated a lot of dust and ice, much like the Deep Impact NASA mission showed us with Comet Tempel, but on a far vaster scale. Consensus then was this impact of a building sized asteroid on the comet, then just above the asteroid belt, was unlikely, but now the same thing appears to have happened, on a far smaller scale, to this icy asteroid, with the ejected debris forming the tail, but the nucleus appearing stellar. The difference between an icy outer belt asteroid and a kuiper belt body and a comet nucleus does not appear to be very much; all contain substantual amounts of ices, and can behave similarly, given energy of impact or approach to the Sun.

It's a long-shot, but perhaps this is a tight binary or near contact binary "grinder" - in which the members have made temporary contact or have been jostled with respect to each other due to some perturbation. One can't help but note that both Mars and Earth happen to be relatively nearby, and could suggest that this and some other MBCs might episodically shed dust in this way.

Any information on a spectrum of the tail? This would be a logical next step to determine if the tail is mostly dusty debris or ionized gasses.