One of things people love about astronomy is the fact that it often involves big numbers. For me, this is especially true when these numbers deal with colossal explosions involving humongous amounts of energy. 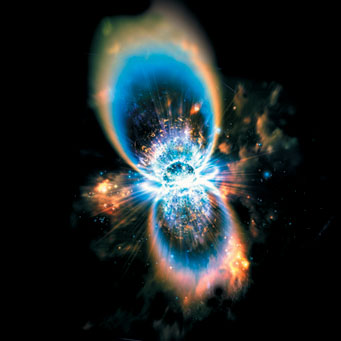 An artist's conception of an exploding star.

When a red supergiant goes supernova, for example, it can briefly outshine its entire host galaxy of billions of stars.

If that sounds impressive, consider a new type of supernova, one that is roughly 100 times more luminous than "normal" supernovae. Since the 1960s, these super-duper supernovae, known as pair-instability supernovae (PISN), existed only in theoretical calculations. But this week an international team of astronomers reports in the journal Nature that it observed such an explosion unfold over a 2-year period starting in April 2007.

Like its lower-energy brethren, a PISN occurs when a massive star no longer produces enough energy in its core to counterbalance the inward pull of gravity. But whereas a normal supernova involves a progenitor star of perhaps 8 to 100 solar masses, a full-fledged PISN marks the death of a star with perhaps 150 to 240 solar masses. With so much mass, the star's core is squeezed to such high temperatures and pressures that its nuclear fusion reactions start producing extremely energetic gamma-ray photons that literally transform themselves (via Einstein's famous equation E=mc2) into particle pairs of electrons and positrons (the antimatter counterpart of electrons). Unlike photons, the particle pairs don't exert an outward pressure strong enough to prevent the star from collapsing gravitationally. As the star implodes, temperatures and pressures shoot through the roof, igniting the entire star's nuclear fuel. Runaway nuclear reactions power a devastating explosion that blows the entire star to smithereens. No compact remnant is left behind; no neutron star, no black hole. Trust me, you wouldn't want to be anywhere near a pair-instability supernova! 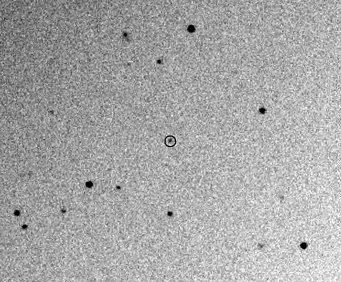 Supernova 2007bi (circled) was discovered in this image taken in April 2007.

The Nearby Supernova Factory group discovered SN 2007bi in April 2007 and quickly realized its unusual nature. An international group led by Avishay Gal-Yam (Weizmann Institute of Science, Israel) was formed to study the supernova. Gal-Yam and his colleagues followed the explosion and expanding debris with a variety of telescopes, and found that the supernova took an unusually long time (70 days) to reach its peak luminosity, that it was much more luminous than most supernovae, and that it faded much more slowly than typical supernovae. These are key indicators that SN 2007bi was particularly energetic.

Spectra taken in August 2008 with the 10-meter Keck I telescope in Hawaii revealed that most of SN 2007bi's light was coming from the radioactive decay of nickel-56, which was synthesized in the explosion. The high luminosity means that the supernova ejected a vast quantity of mass, which is what theorists expect for a PISN. Gal-Yam and his colleagues report on this website that SN 2007bi "appears to be a clean example" of a PISN.

"SN 2007bi is the first really convincing case of a pair-instability supernova," adds astrophysicist Volker Bromm (University of Texas at Austin), who was not a member of Gal-Yam's group.

But for one of the originators of PISN theory, the case is not yet ironclad. "I give it a 50% chance of being a pair-instability supernova," says Stan Woosley (University of California, Santa Cruz). "The case has to be very tight. I'm not sure yet that it is, though in deference to the authors, I think they have tried and passed every test they could think of." 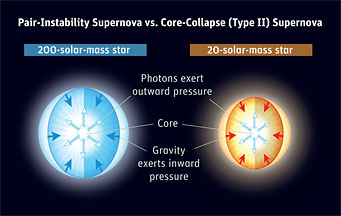 Click on this image to see a larger version that compares a normal supernova to a pair-instability supernova.

If SN 2007bi turns out to be a PISN, it not only gives astronomers a chance to observe a new type of stellar explosion, it offers them a glimpse of an energetic process that should have been a routine occurrence in the early universe. PISN are predicted to occur in stars above about 150 solar masses. Such massive stars don't form in today's Milky Way Galaxy, and they should only form in environments with very low abundances of elements heavier than hydrogen and helium. These conditions were prevalent in the early universe, but not today. In fact, SN 2007bi's host galaxy is 1.6 billion light-years from Earth, and it appears to be a young dwarf galaxy that probably hasn't had time to build up heavy elements. By producing heavy elements and dispersing them, PISN helped create the raw materials that made planets and life possible.

Robert Naeye also wrote about another such object in the Sky & Telescope April, 2007 issue. It was included in 'News Notes', pages 14 -15.

SN 2006gy was spotted September 2006 in NGC 1260 and believed to be an example of a pair-instability supernova. Worth looking at!

I have to agree with both John and Alan: "Worst Name Ever"!
How about 'S-DS' or 'S-DSN' (per article title)?
Charles

Both options for name for this type of supernova sounds like bad names. Let's try "Extreme- Supernova."

If this turns out to be a confirmed Pair Instability supernova, it will be a super opportunity to study the explosion and see if it matches theorecticle models. I am a bit surprized that we would see something like this which happened so recently however.