A Tale of the Sun's Tail

Three years of observations from NASA's Interstellar Boundary Explorer show that charged particles escaping from the Sun form a long tail much like a comet's. 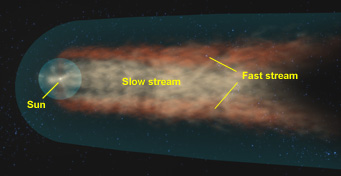 An artist's rendering of how the Sun's comet-like heliotail might extend into interstellar space.

Space physicists have found something surprising that, in a way, they'd expected all along. "Like a comet, our solar system has a tail," David McComas (Southwest Research Institute) announced at a July 9th press briefing. Apparently the solar wind — a million-mile-per-hour stream of charged particles pushed outward in all directions by the Sun — morphs into a long "wind sock" once it reaches interstellar space.

McComas is principal investigator for NASA's Interstellar Boundary Explorer, launched in 2008 to map the turbulent boundary between the heliosphere, an enormous bubble filled with charged particles and magnetic field lines from the Sun, and the realm beyond.

Yet IBEX is nowhere near interstellar space. Instead, it loops around Earth in a highly elliptical orbit. The spacecraft "sees" the boundary thanks to energetic neutral atoms, or ENAs. When the outward-racing solar wind mingles with the interstellar medium, a charge exchange occurs. The zippy solar-wind protons steal electrons from slower-moving interstellar hydrogen atoms and become electrically neutral. No longer controlled by the solar wind's magnetic field, these ENAs then zip away from the interstellar boundary in all directions. Some of them make it back to Earth, where they're recorded by IBEX. 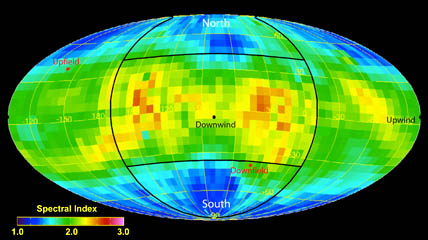 An all-sky map of energetic neutral atoms (ENAs) recorded over three years by IBEX. The black circle shows the hemisphere of space "downwind" in the interstellar flow surrounding our solar system. Red and orange pixels indicate an abundance of slower-moving ENAs, blue pixels an abundance of faster ones — reflecting the solar wind's slower velocity at low and mid-latitudes (between black lines) compared to the very fast polar flows.

The spacecraft's two detectors sweep over the whole sky about every six months. But the data are "messy" (Earth and its own magnetosphere get in the way, for example), and only recently have the first three years of observations been pieced together and cleaned up.

IBEX has an orbit designed to provide the best views in the direction that the Sun is heading — not where it's been. "What's new is that we were never before able to look in direction down the tail," McComas explains.

Looking over the calibrated all-sky map, mission scientists were stunned to see that lots of ENAs are arriving directly from the Sun's "downwind" direction, between Betelgeuse and Aldebaran along the Orion-Taurus border. They realized that the solar wind must stretch out into interstellar space as a long tail.

The extent of Mira's far-ultraviolet tail, extending 2° north from Mira on the sky, discovered by the GALEX spacecraft.

Moreover, the concentration of ENAs is shaped something like a four-leaf clover, with two lobes from a faster-moving stream at the top and bottom and two from slower-moving particles on the sides. 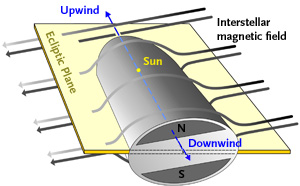 As seen in IBEX's observations, the heliotail gets squeezed and rotated by the interstellar magnetic field that surrounds our heliosphere.

In hindsight, this makes complete sense: researchers have known for decades that the Sun spits out matter much faster from its polar regions than from its midsection. Still, the lobed structure was a surprise. "It's very easy to expect the right thing once you've seen it," McComas admits.

This heliotail also appears somewhat flattened and slightly tipped relative to the Sun's equator. Apparently the interstellar medium's magnetic field is distorting and twisting the solar flow much like a misshapen beach ball encased in Bungee cords.

The new findings are described in a press releases from NASA and SwRI (and detailed in July 10th's Astrophysical Journal). You'll also find the 2½-minute video below (which you can also watch on YouTube) a big help in understanding what's going on.