A Tropical Tempest on Titan

There's an old saying that describes the weather in Maine as "9 months of wintah, and 3 months of damn poor sleddin'." But even the hardiest Mainer would be challenged by the climate on Saturn's big moon Titan, where "wintah" lasts 7½ years, temperatures struggle to reach -290°F (-178°C), the ground is rock-hard water ice, and a mix of liquid methane and ethane rains from the sky. 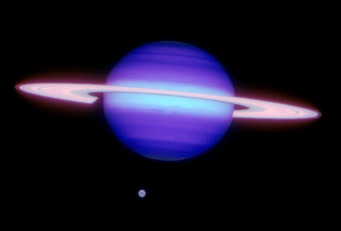 The 8-meter Gemini North telescope recorded this infrared image of Saturn and its big moon Titan on May 7, 2009 using the Altair adaptive optics system with the Near-infrared imager (NIRI). Click on the image for the full-resolution view.

Understandably, planetary scientists are eager to learn more about Titan's remarkable atmosphere. Although an opaque hydrocarbon smog lingers constantly in the dense air, which consists almost entirely of nitrogen with a dash of methane, ground-based observers have become adept at exploiting specific infrared wavelengths to peer deep into the troposphere (its weather layer) and even down to the surface.

An observing team led by Emily Schaller (University of Hawaii) and Henry Roe (Lowell Observatory) has been keeping very close tabs on Titan's weather. In fact, Schaller's Caltech doctoral thesis hinged on analyzing the moon's long-term climatic characteristics. Using a sensitive spectrometer with NASA's 3-meter Infrared Telescope Facility on Mauna Kea, the team set up a long-running "storm watch" — 138 nights over 2.2 years — for signs of sporadic methane-cloud buildups, as had occurred in 1995 and 2004. Whenever it looked like a storm might be brewing, the observers switched to an infrared imager on the much larger Gemini North telescope, also on Mauna Kea.

Unfortunately, Titan just wouldn't cooperate, because during all that time clouds typically covered only 0.3% of the disk. (By comparison, Earth averages 65% cloud cover.) But on April 14, 2008, literally minutes after turning in her thesis, Schaller discovered that a monstrous storm had mushroomed in the moon's troposphere the night before. "I like to think it was Titan's graduation gift to me," quips Schaller, "or perhaps a bad joke." 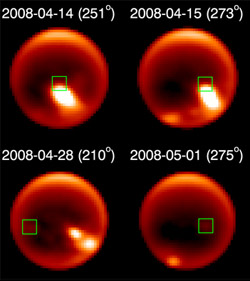 During April and May 2008, a major storm appeared in Titan's atmosphere. A green box highlights a region centered on 15°S, 250°W, where surface activity might have triggered the rare outbreak. Observers used the Gemini North telescope to acquire these images at 2.1 microns. Labels give the date and the longitude at the center of Titan's disk. Click on the image to see the full series.

Cruel twists of fate aside, for the next few weeks Titan's atmosphere put on quite a show. The hurricane-size storm had erupted at mid-southern latitudes, but soon more cloud clusters popped up nearer the equator (where they'd never occurred before) and close to the south pole. Clearly, something was amiss with theorists' climate models. Clearly, Roe admits, "We don't yet understand the atmosphere of Titan."

As the team describes in the August 13th issue of Nature, the tropical and polar outbreaks probably resulted from powerful pulses of wave energy, called Rossby waves, that slowly spread outward from the original storm cell like ripples expanding from where a tossed rock enters a pond. These waves, well known in Earth's atmosphere, can alter the temperature and induce convective activity as they pass through humid air masses.

More intriguing is speculation about what triggered such a rare outbreak in the first place. The source region seems to be centered at 15° south, 250° west, where images from the Cassini orbiter show that the Titanian terrain is rather bland. But it wouldn't take much, Roe explains, to create the large-scale convection for storm clouds to form. Perhaps a cryogenic slurry of ammonia-charged water erupted onto the surface, causing the overlying atmosphere to become warmer, more humid, and ripe for cloud formation. Even a slight heating of the surface from below could have spawned the storm.

You can bet that Cassini scientists will be paying special attention to this region the next time their spacecraft passes within view of it. Maybe they'll find the landscape awash with fresh ice flows. Or perhaps they'll just find it awash, recently drenched by a methane-ethane deluge from the storm clouds that passed overhead.

To learn more about this soggy saga, check out the press releases issued by the Lowell and Gemini observatories, Caltech, and the University of Hawaii. More entertaining is a post by team member Michael Brown. 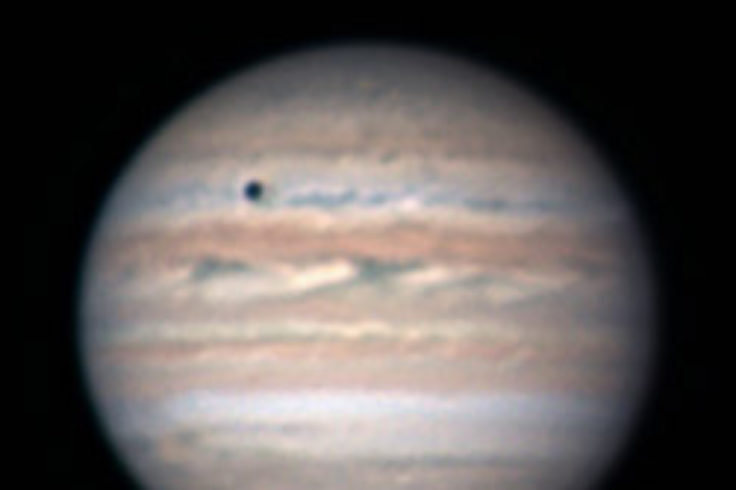