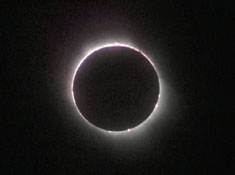 For observers aboard the MV Discovery, totality was breathtaking but brief, lasting only 33 seconds. This frame from a video recording, snapped at 11:51 a.m. local time, doesn't do justice to the spectacle. It overexposes numerous electric-pink solar prominences around the Moon's silhouette and shows only the innermost corona, which stretched at least one solar diameter as seen by eye.

The Moon's dark shadow swept across the Pacific Ocean on Friday, creating a spectacular total solar eclipse that just missed being seen by nobody. Because the path of totality never made landfall, the only people who experienced the dramatic midday darkness were an estimated 1,500 passengers and crew members aboard three cruise ships. These travelers went a very long way for a very brief eclipse, as totality lasted barely 30 seconds, and they had to dodge clouds to see anything at all. But what the event lacked in duration it more than made up for in dazzle.

Experienced eclipse-chasers aboard the MV Discovery north of the Pitcairn Islands described the eclipse as the most colorful one they'd ever seen. When totality set in, the Moon's inky black silhouette was rimmed with a thin and nearly complete ring of magenta fire that was in turn enveloped by a fainter and more expansive white glow — the solar corona, or outer atmosphere — that extended in opposite directions like a bow tie. Adding to the spectacle, the planet Venus gleamed brightly to the right of the Sun in a deep twilight-blue sky.

What made this eclipse so colorful (and so short) was the nearly perfect match in apparent size between the Sun and the Moon. The Moon just barely covered the Sun's visible face, revealing not only the vast corona but also the chromosphere, the thin lower layer of the solar atmosphere that glows with the characteristic red light of energized hydrogen atoms. In most total eclipses the chromosphere is visible only fleetingly at the beginning and end of totality, on opposite sides of the Sun. But this time it formed a nearly complete circle, accented by more than a half dozen flamelike prominences. A particularly large and bright prominence at the 12-o'clock position had detached from the Sun's limb and hung suspended in space.

Observers aboard the Discovery and the Paul Gauguin about 200 kilometers (125 miles) to the northeast were not sure they'd see totality. April 8th dawned partly cloudy in the Pitcairns, with a worrisome combination of low cumulus and high cirrus clouds. In the days leading up to the eclipse, much attention had been focused on satellite photos tracking the development of these weather systems. On the night of April 7th, onboard meteorologist Jay Anderson recommended that Discovery move well to the northeast of its originally planned viewing position. Capt. Erik Bjurstedt agreed, and the ship steamed all night to outrun the clouds that threatened from the southwest. 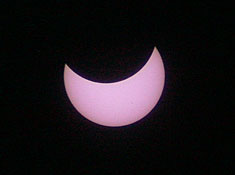 About 45 minutes after the Moon took its first bite out of the Sun on April 8, 2005, the partially eclipsed solar disk was a thick crescent as seen from the remote South Pacific Ocean. Totality occurred about a half hour later.

Occasionally during the partial phases of the eclipse the next morning, the Sun was blocked not only by the Moon, but also by billowing clouds. But observers on both ships saw all of totality around local noon through only a thin haze of cirrus that did little to diminish the experience. Indeed, some felt that the clouds enhanced the experience, partly because they heightened the drama, and partly because they hid Venus until the moment of totality, when it popped into view suddenly and brilliantly. Many eclipse-watchers also noted the appearance of a colorful 22°-diameter halo ringing the partially eclipsed Sun shortly before totality, caused by ice crystals in the high clouds.

Sky & Telescope columnist E. C. Krupp watched the eclipse without optical aid from the bridge of the Discovery. He noted that the twilight colors encircling the horizon were brighter than usual and more yellow than orange or red. No doubt this resulted from the small diameter of the Moon's shadow cone — only about 10 miles rather than the more typical 100 or so. Veteran astrophotographer George Keene observed totality in the viewfinder of his camera as he struggled to get off about a half dozen shots while the ship pitched and rolled in the ocean. He noted that the veil of cirrus "fuzzed things up" and made anything but very short exposures impossible. Although he won't know his results till he gets home because he shot the eclipse on slide film, others aboard the Discovery used digital cameras and got instant gratification. It's already clear that there are lots of great photos of this eclipse; many will appear in future issues of Sky & Telescope. 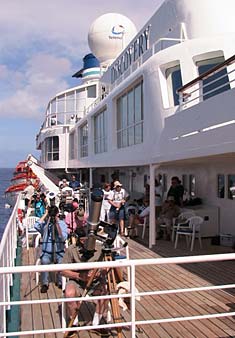 Fewer than 1,500 people witnessed the total solar eclipse of April 8, 2005, aboard three cruise ships in the Pacific Ocean. Here some of the 900 passengers and crew members on the MV Discovery watch the partial phases leading up to totality from a position northeast of Oeno Island in the Pitcairns.

Nobody on the Discovery reported seeing shadow bands just before or after totality, nor did anyone catch sight of 2nd-magnitude Mercury shining to the upper left of the eclipsed Sun (most didn't dare waste valuable time looking for it). Given the presence of clouds, the latter non-observation is not at all surprising. What is surprising is the fact that some observers, including a handful of first-timers, noted a greenish cast to the corona. Some felt that this might be purely a visual effect caused by the eye's reaction to the intense pink of the chromosphere and prominences. But a green coronal tinge has been reported during past eclipses where very little chromosphere was visible, and a distinct green coloration seems to have been captured in some of the digital photos shot on April 8th.

Like many of his fellow eclipse-chasers, Jay Anderson didn't sleep well the night of April 7th as the Discovery raced in search of clear skies. But afterward he expressed relief and contentment, despite feeling that his time in the Moon's shadow lasted far less than the 33 seconds elapsed on the ship's clock. "Any eclipse you see," he quipped, "is better than an eclipse you don't see!"