For generations astronomers have wondered whether all comets originated here in our solar system, or if any of them may have come from other stars. 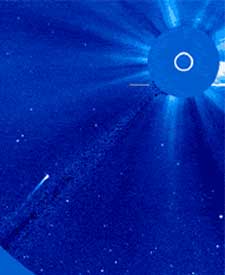 Comet Machholz 1 (96P) swept past the Sun on January 7-8, 2002, one orbit before its 2007 pass. This image, recorded by the Solar and Heliospheric Observatory, shows the comet's bright nucleus and tail. The white circle represents the Sun's disk (hidden behind the blue occulting mask), and Venus is just outside the frame to the Sun's lower right. Click on the image to see an animation of the comet's motion (456K).

Comets are sometimes seen to get ejected from our solar system with velocities great enough to fling them clean out of the Sun's gravitational domain, forever to roam loose in the dark interstellar spaces of the Milky Way. Moreover, this must have occurred to far more comets near the time of our solar system's birth. The same should be happening among comets around other stars that have planets. (Planets are what perturb comets' orbits and do the flinging.) Most stars are believed to have planets and cometary systems of their own.

One obvious sign of an interstellar comet in our midst would be an arrival speed greater than the Sun's escape velocity. The average motion of other stars with respect to our solar system is a few dozen kilometers per second, and comets ejected from other stars would carry these velocities too. Such a large excess speed would be plain as day, but no observed comet has ever been moving anywhere near so fast.

However, most comets do not have their original orbits. They've been perturbed into new ones by the slight tugs of the planets during earlier swings through the solar system. This is especially true for short-period comets that return every few years. Their orbits have been perturbed radically, mostly by the planet Jupiter.

One comet with a radically modified orbit is Periodic Comet Machholz 1 (also known as 96P/Machholz 1), discovered by amateur comet hunter Don Machholz in 1986 using 29×130 binoculars. It has an orbital period of 5.3 years and a high inclination with respect to the plane of the solar system. A new study finds that its chemical makeup is unique among 150 comets analyzed to date. It must have had a very unusual origin and might even have formed in another solar system where things were quite different than here.

However, dynamical studies have found that the chance of the solar system capturing and holding a passing interstellar comet is very slim.

Lowell Observatory has put out a press release about the new finding. The comet's gaseous exhalations turn out to be extremely deficient in carbon compounds, unlike any other. From the press release:

"Astronomers identified two other classes [of comets] in the 1990s. . . . While Machholz 1 also has strongly depleted C2 and C3 carbon species, what makes it anomalous is that the molecule cyanogen, CN, is extremely depleted. In Machholz 1, CN is missing by about a factor of 72 from the average of other comets, i.e., [it has] only a little above one percent of normal. . . .

"One possible explanation is that Machholz 1 did not originate in our solar system, but instead escaped from another star. In this scenario, the other star's proto-planetary disk might have had a lower abundance of carbon, resulting in all carbon-bearing compounds having lower abundances. . . ."

A second possible explanation is that Machholz 1 formed farther from the Sun than most comets, in a colder or more extreme environment.

A third possibility is that Machholz 1 has been, paradoxically, altered by extreme heat. In fact, Machholz does swing unusually close to the Sun (0.12 a.u.) every five years, as in the image at the top of this page. However, the only other comet to show a depletion of CN did not reach such high temperatures. This implies that CN depletion does not require extreme heat.

"If additional carbon-bearing species are also strongly depleted," says study author David Schleicher, "then the case for its origin outside of our Solar System would be strengthened." The next opportunity to check for this will be when Machholz 1 returns near the Sun in 2012.

Although the press release touted the interstellar theory, and news stories picked this up, there are reasons to be skeptical. An analysis back in 1986 found that order to shed a typical interstellar velocity of 20 km per second and get captured by our planetary system, a comet would have to make such a close pass by Jupiter that (based on the observed upper limit on the number of interstellar comets) such an event will happen less than once in 60 million years.

On the other hand, the rare interstellar comet than happens to have a very low speed with respect to the Sun (much less than 1 km/sec) would be captured more easily: with only a little more trouble than the capture of a comet falling in from the Oort Cloud, something that happens often.

Comet expert Paul Weissman (Jet Propulsion Laboratory) calls an interstellar origin for Machholz1 "the least likely solution" for its weird chemical composition. "Capture of an interstellar comet into the solar system is a very unlikely event. Extreme thermal processing, or a primordial difference in the composition of Oort Cloud comets, are more likely explanations. In the past the explanation for the carbon depletions is that those comets formed farther out from the Sun." The high inclination of Machholz 1's orbit, 59°, suggests that it came from the Oort Cloud rather than the Kuiper Belt, which is the source of most short-period comets.

Here's Schleicher's research paper on Machholz 1, which appears in the November Astronomical Journal.

This is a good report here. I note this comment –“One comet with a radically modified orbit is Periodic Comet Machholz 1 (also known as 96P/Machholz 1), discovered by amateur comet hunter Don Machholz in 1986 using 29×130 binoculars. It has an orbital period of 5.3 years and a high inclination with respect to the plane of the solar system.”

A 5.3 year orbital period is a short-period comet and these comets do not last millions or billions of years because of mass loss rates, especially during perihelion passages. If some consider this comet captured by our Sun from another solar system, such an interpretation suggests the event took place recently. Long period comets have a similar problem with life expectancy in our solar system too. I used a model orbit where eccentricity = 0.99, semimajor axis = 80 AU (Pluto is near 40) and found the period could be near 710/715 years (at the semimajor axis, the comet could have an unperturbed velocity of 3.3 km s^-1). In one billion years, such a comet could encounter 1.4 million perihelion passages and the 5.3 year period comet Macholz 1, nearly 190 million. All that I can say about these observations - the comets are indicators of a recent orbital history in our solar system unless the Oort Cloud is used to interpret allowing comets to be replenished over time.

How does everyone seem to know it is a comet from another solar system. It could very well be some object made by another race of people from outside our solar system doing a little searching. I would think it would be hard to prove, there is so many things we as human beings have yet to understand, we do not know everything, yet and there may be other Civilizations out there which is in most cases Highly and Likely Probable, and there mode of transportation is something we absolutely know nothing about, just figured it is worth mentioning, thanks Bruce

The best theories we have is that stars form in clusters with a few hundred members, then these cluster dissipate within a few hundred million years because the N-body problem is unsolvable. But some of those problems are less unsolvable than others. I think stars trading objects during close passes is the most likely way for the Sun to capture an external object. The mass ratio between two stars (I am of the opinion that brown dwarfs are stars, too, just "fuel challenged") is much higher than the mass ratio of the Sun and Jupiter. This makes the capture solution of the three-body problem more likely. Such a small star or large "planet" might stell be around. There is better evidence than Machholz 1, like 2004 XR190 or Sedna.

Some interesting comments I see especially about our Sun's birth cloud and it originally being a member of an open cluster in the Milky Way. This brings up critical parameters I like to examine, what I call "solar system deep time".

Some issues in solar system astronomy when using the time scale of 4.5E+9 years that many folks may not think about.

1. The Sun has an orbital period in the Milky Way near 230E+6 years so it completes 20 galactic rotations in the spiral arms.
2. Jupiter completes more than 379E+6 revolutions around the Sun.
3. The asteroids in the main belt have mean orbital periods near 4.4 years so some or a number could complete 1E+9 revolutions around the Sun.
4. The lunar orbit in the Precambrian 2.5E+9 years ago is near 50 earth radii compared to its present mean near 60.3 earth radii today. The lunar orbit <=15 days compared to 27.3 days today. In the giant impact model for the origin of the Moon, it forms close to 3 earth radii and 1E+5 years later is orbiting near 10 earth radii with the lunar month < 2 days. 5. Globular clusters in the Milky Way with a = 8 kpc (similar to the Sun's semimajor axis) and e = 0.65 could have orbital periods near 240E+6 million years and complete 18 revolutions. For globular clusters like M13, the published period is near 470E+6 years so it could complete about 10 galactic orbits. M15 has a published period of 286E+6 years so it could complete nearly 16 galactic orbits. These astronomical parameters cannot be tested or are difficult to test, we need to remember issues like this too when the origin of the solar system is discussed or its age.