With the count of exoplanets (planets known to orbit other stars) now at 415, it's not often that a new find makes much of a splash in the astronomical world, let alone the news media. And the competition for getting noticed is going to get harder, now that NASA's Kepler mission is working on its quest to find even small, Earthlike worlds out in the Great Beyond. 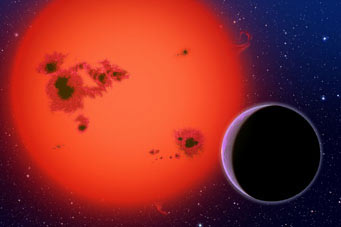 An artist's concept of the dim red dwarf GJ 1214 and its close-orbiting waterworld. The planet is actually one-eighth the apparent diameter of the star.

For example, so far this month, ground-based planet hunters headed by Paul Butler and Steven Vogt announced that a total of three smallish worlds (with minimum masses of 5, 18, and 24 Earths) orbit the star 61 Virginis, a near-twin of the Sun just 28 light-years away. And the same group announced an 8-Earth-mass world, and hints of two more, orbiting HD 1461, a close copy of the Sun 76 light-years away in Cetus.

Another group announced that the Sun-like star 23 Librae (HD 134987) seems to have a Jupiter-like planet in a circular orbit at a Jupiter-like distance. This is a sign that, at last, planetary systems similar to our own are beginning to reach detectability, as technology improves and the intervals of radial-velocity observations lengthen.

As evidence for how common such discoveries are likely to become, Butler says it appears increasingly likely that half of the nearest stars possess at least one detectable planet with Neptune's mass (17 Earths) or less. I guess the caretakers of the ultra-handy Extrasolar Planets Encyclopedia have rock-solid job security for the foreseeable future.

That said, one recent find, dubbed GJ 1214b, is worth the extra keystrokes, for two reasons. 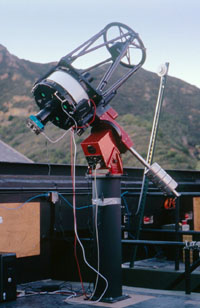 Each of the eight robotic MEarth planet-hunting is a 16-inch f/9 Ritchey-Chrétien on an equatorial mount. The CCD detector records 2048 × 2048 pixels through a custom filter that lets in light at wavelengths longer than 715 nm.

First, it was discovered using automated telescopes of a new planet-hunting effort dubbed MEarth (pronounced mirth). These 16-inch scopes, which wouldn't look out of place in the backyards of well-equipped amateurs, are surveying about 2,000 nearby red dwarf stars for planets that transit across their faces. Because these stars have small diameters, the light drop-off caused by a transiting planet is greater and easier to spot than when it happens to a larger star. GJ 1214b, for example, circles a very dim red dwarf star in Ophiuchus every 1.6 days at a distance of just 1.3 million miles (0.014 astronomical unit). The planet's diameter is about 12% of its host star's, which made it easy pickin's for the MEarth scopes.

More intriguing is what GJ 1214b might be. Describing their discovery in the December 17th Nature, a team led by David Charbonneau and Zachary Berta (Harvard-Smithsonian Center for Astrophysics) note that this world has about 6.5 times the mass of Earth (derived from the star's gravitational wobble) but a full 2.7 times Earth's diameter derived from the transit depth).

Those specs don't match those of any other planet — in our solar system or known elsewhere. It has almost the same mass as the one other transiting "super-Earth" discovered so far, Corot-7b, but the two could hardly be more different in makeup, judging by their average densities. Whereas Corot-7b is probably a molten-hot mix of rock and metal, the average density of GJ 1214b (1.87 g/cm3) is too low for this world to be rocky and too high to be a gas giant.

Instead, it most likely consists almost entirely of water, overlaid by a massive atmosphere. It's thus the first specimen of an entire new class of planet. (OK, OK, it's the second if you count the wacky, hypothetical place portrayed in the 1995 sci-fi flick Waterworld.) Since it orbits so closely, GJ 1214b probably has a surface temperature near 400°F — hot as an oven and almost certainly devoid of life but still cooler than any other known transiting planet. The interior would be much hotter, but at the extremely high pressures deep inside a planet, even very hot water exists in solid form: hot ice.

So what would it be like on such a place? Exoplanet specialists are puzzling about that right now. In an analysis posted online just two days ago, MIT researchers Leslie Rogers and Sara Seager postulate that a waterlogged world isn't the only possibility. It might also be a mini-Neptune (with layers of metal, rock, and hot ice, topped by a dense hydrogen-helium atmosphere), or it might be an outgassed super Earth with a thick enough hydrogen atmosphere to make the planet's diameter seem much more bloated than its solid parts. But no matter which of these matches reality, GJ 1214b has broadened the definition of "planet."

For more information check out the press releases issued by the Center for Astrophysics and the European Southern Observatory.

Software Bisque, who manufacturers the Paramount used for the MEarth project, has a cool video showing the MEarth telescopes in operation. Click on the link "Video of this observatory in action" near the bottom of this webpage.

Wow, this is very intriguing. I am so thrilled that astronomers are finding these types of things, and nearby too. With GJ 1214b only 40 light years away it gives us a chance to study it in more detail and hopefully find evidence of liquid water or bacterial life.

My sense was that in our own solar system, the close-in worlds tend to be dry, with increasingly wetter worlds the further out you get from the sun. What water we have on earth we owe to bombardment from comets early in the planet's history. Large as our oceans seem, they are really a thin membrane on a rocky world. So how might we explain the apparent anomaly of GJ 1214b? Either that system formed very differently than our own, or the planet formed further out and some event knocked it into a tighter orbit.

Any chance of observing a secondary eclipse, perhaps through a narrow band-pass filter tuned to 400 degrees F.? I believe that would yield an even more accurate temperature reading for the planet.

The timing of a secondary eclipse might also give info about the ellipticity of the orbit.

Congratulations on your recent receipt of the Jonathan Eberhart award. Jonathan was my father's cousin. When I was growing up I had the infrequent pleasure of being in the presence of Jonathan. I will always remember his wit, his extremely individual character, and his great music. The last time I saw Jonathan was during a visit to DC. His medical issues were well along at that point, but his presence was still very much intact. I miss him and wish that I had more of an opportunity to hang with him.

My father recently passed and during this time of retrospective activity, I have been spending time considering the path traveled by my father and his family. I found myself remembering Jonathan and I ran across your recent award. I just wanted to say congratulations.

A 16" RC on a Paramount, those would be "well-equipped amateurs" indeed. Thanks for another fascinating story, Kelly.