A "Whodunit" in the Asteroid Belt

The mystery of a comet-like object circling among the main-belt asteroids has deepened, now that astronomers have slewed the Hubble Space Telescope over for a close-up look. 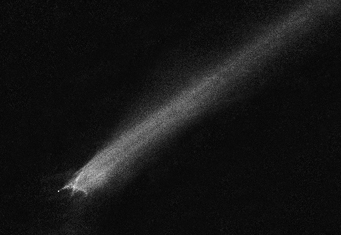 At first astronomers though the object designated P/2010 A2 was a comet, but this Hubble Space Telescope image, taken January 29th with the Wide Field Camera 3, suggests that it's not behaving like a normal comet.

Today's release of an HST image taken four days ago shows that P/2010 A2 is no normal comet. There's a strange X-shape feature at its brightest end (I hesitate to call it a "nucleus") that defies easy explanation. "This is quite different from the smooth dust envelopes of normal comets," explains David Jewitt (University of California at Los Angeles), who led the Hubble effort. The Hubble view also clearly shows a pointlike object hovering nearby, about 1,000 miles from the "X" and seemingly connected to it by a thread of material.

Comets within the asteroid belt aren't unprecedented. Jewitt's website comments that four others are known. Most notable among these is 133P/Elst-Pizarro, first spotted as an asteroid in 1979 and then found to have a cometary appearance in 1996.

But apart from its long tail of debris, P/2010 A2 doesn't look much like a comet, at least in the HST images taken on January 25th and 29th. Moreover, it lacks the emissions that are usually found in a comet's coma and tail. "No gas yet," Jewitt told me, "but we are still looking." Unfortunately, a request to observe this curiosity with the Spitzer Space Telescope was turned down. 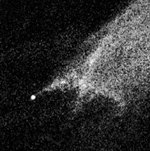 Enlarging the Hubble Space Telescope image shows the unusual crisscrossing filaments of the comet-like object designated P/2010 A2. Note the how one strand extends to the "nucleus' at left. This cropped view is about 4,000 miles (7,000 km) across.

The most likely explanation for this object's sudden appearance (it's a stretch to call it "dramatic" — it's only 20th magnitude) is that a pair of small, unseen asteroids collided, creating the trail of debris first spotted on January 6th by the LINEAR telescope in New Mexico.

So would a smashup involving two main-belt asteroids result in something like this? Perhaps. "Bill Bottke and I are thinking about what kind of modeling would be useful to do with this object," notes David Nesvorny (Southwest Research Institute), "but we have nothing definitive so far." Bottke notes that while a collision seems plausible, it's also possible we are witnessing an asteroid that's been spun up (by gradual interactions with sunlight) to the point that it started shedding mass.

Jewitt says that there's no handle yet on whether the "nucleus" is tumbling or spinning rapidly. But he says more Hubble sessions are planned in the months ahead.

Bottke may be onto something will the shedding mass thing. I think it is quite possible.

Is there enough evidense to rewind and pattern back using computer symulatiom?

Thought something like this, on grander scale, was what happened to nucleus of Comet Holmes in late October 2007. Probably asteroid no bigger than a large building could have blown out debris, much like Deep Impact did to Comet Tempel II in 2005. Think difference in appearance is due to angle of impact and ejected debris field...Holmes pointing away from us, almost circular, and this side impact making "tail" much more visible.