Winds in the early universe could make radio observations of the first stars and galaxies a little easier. 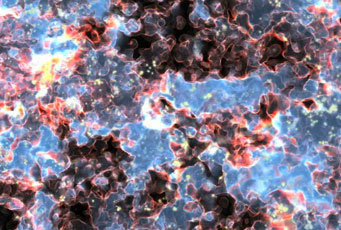 An artist imagines the adolescent universe, some 250 million years to 1 billion years after the Big Bang. The first stars and galaxies have already formed, burning holes in the surrounding hydrogen gas. Current generation telescopes are beginning to investigate this era, but new simulations suggest that information can be gleaned from earlier in the universe's evolution as well.

The early universe was a vastly different place from the one we see today. No stars burned in faraway galaxies — there weren’t any galaxies. Instead, photons were trapped in a dance with the hot plasma of protons and electrons that suffused the universe. Sound waves rang out across this primordial soup, sloshing gas and photons into waves of higher and lower density. Only after about 300,000 years did the universe expand and cool enough for protons and electrons to begin to combine into hydrogen atoms. That set the photons free to travel across the universe, giving us the cosmic microwave background.

Meanwhile, the hydrogen atoms fell together into gravity wells created by clumps of dark matter, starting the building process for proto-stars and proto-galaxies. But there’s a catch. The sound waves ringing through the dense primordial soup gave some hydrogen atoms a bulk motion. That created a “wind” of ordinary matter that simply swept past the smaller of the dark matter clumps.

The existence of that wind might have important consequences for the formation of structure in the early universe, researchers found in 2010. Now, an international team reports this week in the journal Nature the first simulated 3D maps that take this wind effect into account.

Eli Visbal (Harvard University) and his colleagues mixed various physical considerations together to create the new maps, which show how the first stars might have been distributed in the young cosmos. When the universe is only 70 million years old, the stars already form a webby structure like that seen in today’s universe, with clumps and voids roughly 20 million light-years across, large enough to be important for radio observations.

“You no longer have the old picture of dark matter and gas both quietly evolving,” says Jonathan Pritchard (Imperial College London), who was not involved with the study. “Instead, you have supersonic winds of gas that could blow the gas out of dark matter gravity wells.”

In a windy early universe, galaxies would have been harder to form: only larger matter clumps would have successfully retained gas. But that’s good news for radio telescopes looking back in time at the first structures in the early universe, because it means those first structures were larger (and, therefore, more obvious) than previously thought. 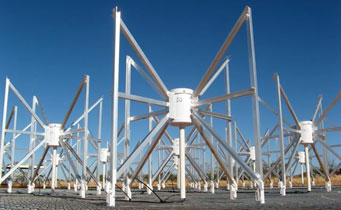 The Murchison Widefield Array in Australia is a low-frequency radio telescope with an eye toward the evolving universe after the first stars and galaxies formed. A prototype has already been built, and construction has begun on the MWA, with science operations to begin in late 2012.

Individual stars and galaxies are too far away to be seen directly. Astronomers take an indirect approach, looking for where neutral hydrogen atoms don’t exist. That’s because, as the first stars formed, they heated their surroundings, blowing out bubbles of ionized hydrogen sort of like the holes in Swiss cheese, explains Abraham Loeb (Harvard University).

Looking for the first stars is therefore a search for holes in hydrogen emission. In the lonely depths of space, neutral hydrogen atoms undergo a rare energy transition, emitting a radio signal with a specific wavelength of about 21 cm. This signal can be seen by radio telescopes and is often used to map galaxies’ extended disks.

Low-frequency radio telescopes such as the Murchison Widefield Array, the Low-Frequency Array (LOFAR), and the Precision Array to Probe the Epoch of Re-ionization (PAPER), already use the 21 cm signal to investigate the adolescent universe at an age of 250 million to 1 billion years after the Big Bang. At that point, stars and galaxies had already formed. Astronomers are planning the next generation of radio telescopes to go even further, looking back to the formation of the very first galaxies. (MWA and LOFAR do extend to low frequencies, but not at high enough sensitivity to test the predictions made by the simulations.) 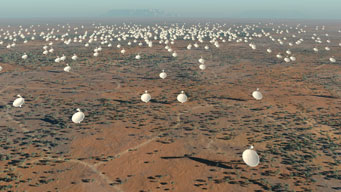 An artist's illustration of the field of telescopes that will be part of the planned Square Kilometer Array.

Simulations like those in the new study are crucial for planning future projects such as the Square Kilometer Array, Pritchard says. With powerful enough radio telescopes, astronomers could potentially see the 21 cm signal from a universe only 10 million years old, but researchers need to know whether it’s even worth building instruments to look that far back. The new results suggest that the earliest Swiss-cheese hydrogen holes should be detectable around 50 to 150 million years after the Big Bang, at a time that (before now) it wasn’t clear there was anything to see. That could help plans are already being proposed to extend SKA’s frequency range to lower bands where such early times would be observable.

"researchers need to know whether it’s even worth building instruments to look that far back" - Well, those who fund the research will want to know that, but really we have to look, if only to find that there's nothing there to see. We won't know until we look. The most important advances in our understanding occur when we look for what we KNOW and see something different. Then we have to figure out WHY, and that's where new understanding comes from.

That is a beautiful comment Ken. Is cosmology heading up a blind alley? How will we know, unless we look?

To a degree I stole that from Isaac Asimov. The way he put it was: The true cry of discovery is not 'Eureka!', but 'Now WHY did THAT happen?' (from memory, so approximate)